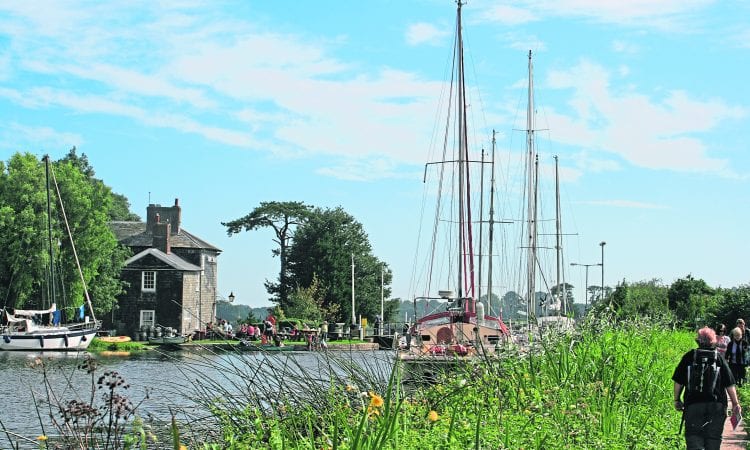 FEW places on earth can feel solitary at the same time as welcoming people. There’s a secret spot in Devon that attracts hordes every year for the rare thrill of that perfect moment.
The Turf is a honeypot site where a  canal wrestles with nature, as the land  ends and the sea tries to bully its way along the Exe Estuary.

The river Exe connects the historic city of Exeter with the sea. The estuary sprawls with shifting sandbanks and a deep water channel that doesn’t always behave well.
The Romans and the Danes tackled the water route during their reign over the city, and navigation through the 13th century helped Exeter to prosper. But eventually over-silting and extortionate tolls made the route impassable.
John Trew was set the challenge of cutting a man-made water route to run parallel with the river. The first stage of the Exeter Ship Canal was built in 1567, over two centuries ahead of the great canal era.
A canal that swells with stories from Tudor times is bound to appeal to visitors, and history clenches the imagination immaculately as tall masts sway in the salty breeze and rusty mooring chains clink from modern boats on the canal.

The canal was extended further in the late 1600s and the Double Locks (between Topsham and Exeter) were built to replace the original trio of locks. It was so unusually large that small boats were carried round the lock on rail tracks to save the water, time and effort needed to fill the chamber. The canal continued to grow as an important link with Exeter, and by the 17th century the city became one of the richest in England.

James Green completed the canal build to its full 5¾ miles in 1827. From Topsham Lock to Turf Lock there is still a towpath on either side of the canal. This was unusual in its time, and was designed to allow two horses to work together to pull heavier loads. Horse power (at 2hp) was the pride of this stretch of canal and yet, now that horsepower is man-made, the end section of the Exeter Ship Canal is hallowed as a car-free route. There’s no point scratching at maps to find a road to the Turf, this is for boots, bikes and boats only.

In summer months, clusters of outdoor folk pilgrim to the Turf. There’s only one way there and one way back, and the journey is part of the experience. This is not remote England (there’s a car park for those who only want to walk the half mile to the end of the canal) but the explicit exclusion of road access gives the final stretch a unique vibe.

At the very end of the canal, the final sod of earth at the petering edge of land marks the point where a man-made waterway hands over to nature. The wild winds of the river estuary sweep waves at the canal and grip the voyeur. The grass sways gracefully and there’s a soulful air from the triangular spot where water surrounds three sides of the land. The chance of seeing rare species of wildlife enjoying their freedom perfects the moment – avocets feed on the mud flats, geese, curlew, warblers, lapwings and hordes of unrecognisable creatures swarm in the perfect loneliness of a corner in Britain where cars aren’t allowed.
The Turf is a trickster when it invites the visitor to inhale the solitude. A cherry on the icing awaits the pilgrim who reaches the end of this canal – a fantastic pub. The Turf Hotel isn’t like other canalside pubs; it speaks seaside lingo, with the tide times above the bar. Open fires, local ales, and dogs galore that are genuinely welcome. England at its watery best.

Exe Estuary
The Exe Estuary is a designated Site of Special Scientific Interest (SSSI), a Special Protected Area (SPA) and a wetland site of special interest (Ramsar), due to the wealth of wildlife living here. The Turf is where the Exeter Ship Canal meets the Exe Estuary. There are no barriers or admission charges – you can visit at any time (unless you want to visit the pub of course!). www.exeter.gov.uk  www.exe-estuary.org

The Turf Hotel
The Turf is in an enviable position on the tiny spit of land between the canal and the estuary. It’s one of only a few pubs in the UK which can’t be reached by car. www.turfpub.net

Special Interest
Both Turf Lock and The Turf Hotel are Grade II listed.
Location
Turf Lock
OS Grid ref: SX963860
Canal: Exeter Ship Canal
How to get there
By train
Nearest train stations are Exeter St Thomas, Exeter St Davids and Starcross (two miles south of the Turf)
National Rail Enquiries 08457 484950
By bus
Traveline 0871 200 2233
By car
Nearest parking is half a mile’s walk along the towpath.
On foot or bicycle
The Exeter Ship Canal’s towpath is part of the Sustrans National Cycle Network Route 2 and an easy route to cycle and walk.
By boat
Nearest boat trips:
Topsham Ferry
Topsham Turf Ferry from Topsham to the Turf. Daily late May to mid September, plus weekends Easter, April to September. Also available for private charter. 07778 370582 www.topshamtoturfferry.co.uk
The White Heather ferry from Double Lock pub to Turf Lock. Timings vary. 07806 554093
Moorings
There are visitor moorings in the canal above the lock and pub. Canoes can be taken out of the water, and relaunched, by the pub just next to the lock.