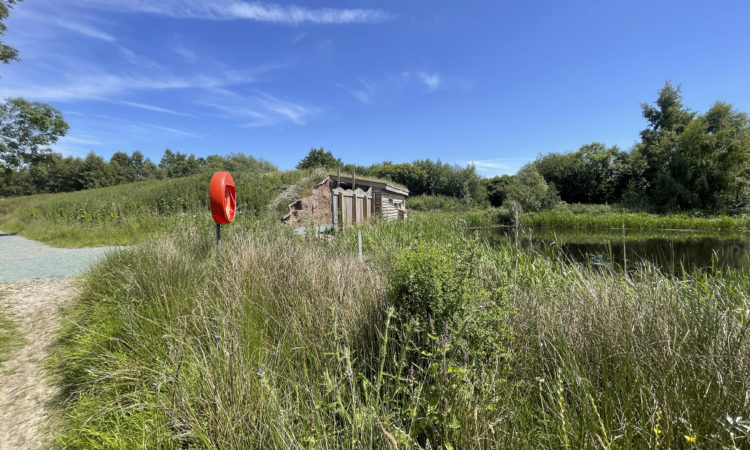 The Montgomery Canal is not known as a cruising hotspot, and for those who have discovered it, you get the feeling many would like to keep it that way. But as was pointed out at the recent Montgomery Canal Forum, the canal could generate a significant income for the local community if more people did discover it. With something like 70% of those who visit the canals doing so on foot, there is an obvious need for there to be something other than the waterway itself for visitors to enjoy, and in the case of the Montgomery Canal, there is just such a place.

Close to lock two on the canal, there is a path, denoted by a colourful information board illustrated by artist Sophie Foster, that shows the layout and points of interest in the nearby Aston Lock nature reserve. Follow the path a short distance, past totem poles decorated as part of a community workshop run by local ceramic artist Ruth Gibson. The ceramic plaques are, apparently, mounted on timbers recycled from old lock gates. These same lock gates are also used to form a series of seats around the reserve. As you follow the path, you eventually come to the entrance of the main hide, The Otter Holt, overlooking one of the large pools, the reserve’s main feature.

The hides, at Aston Lock, together with the sculptures and much of the artwork, were created by the team at Wild Murals headed by Helen Shackelton. Helen often works with her husband Lloyd of Lloyd Turner Ltd, who look after the construction aspects of the projects they undertake. The couple and their team have, over the years, built an enviable track record for commissions of this type. Their client list is truly impressive and includes the likes of The Royal Parks plus a number of high-profile wildlife charities and organisations.

The Aston Lock nature reserve is designated as a Site of Special Scientific Interest and, as such, is said to boast a number of rare aquatic plants. The site now covers three hectares of wildlife habitat and was completed in late 2018, when I, and a group of members of the press, were lucky enough to be given a tour of the site before the landscaping and ground works were completed. Over the years, I’ve been back a number of times and watched the site mature, something it will continue to do for many years to come, and it was good to see the progress of the hides and other visitor features over recent months.

Having visited many hides, most of which look like garden sheds, I can honestly say I’ve not seen one quite like this. The entrance looks like you are entering a cave, and once inside, it is almost as interesting to read and enjoy the artwork and sculptures inside as it is to look through the various windows. The Otter Holt hide is one of two on the site, one of which is known as the ‘quiet hide’, but I can’t vouch for that. During my last visit, on the Summer Solstice, you couldn’t get near the hide for the growth of vegetation on the path leading to it. It was a shame as access takes you over a new footbridge over the spillway at lock two. I can only assume that the hide is living up to its name mainly due to a lack of visitors!

Despite its size the site is easy to overlook and includes two large pools, one of which takes a meandering path to creature even more habitat. The reserve is bordered by a path to allow visitors to walk around almost the entire site. With almost nonexistent vehicle access, this site is truly one for the waterways visitor but has received little or no publicity for some reason.

For the wildlife enthusiast, the site has seen many different bird and mammal species in addition to the plants and insects. With wetland habitats in decline, the importance of places like this can’t be overstated. Dedicated wildlife watchers may feel the hide doesn’t need the decoration, but what we all need is for young people to engage with nature if we are to stand any chance of surviving. So if places like this help foster an interest in the natural world, then I am all in favour of it.

This hide, and the work that has gone into creating the entire nature reserve visitor experience, seems to have gone unnoticed. Despite a number of requests to CRT, there appears to be hardly any interest in promoting this site. No press releases were sent when it opened, and much of the information online seemed to date back several years. So come on, CRT, tell more people about this site! Maybe there are those who want to have the Monty to themselves, but it is too nice a location not to share it.

Have a look at the video: