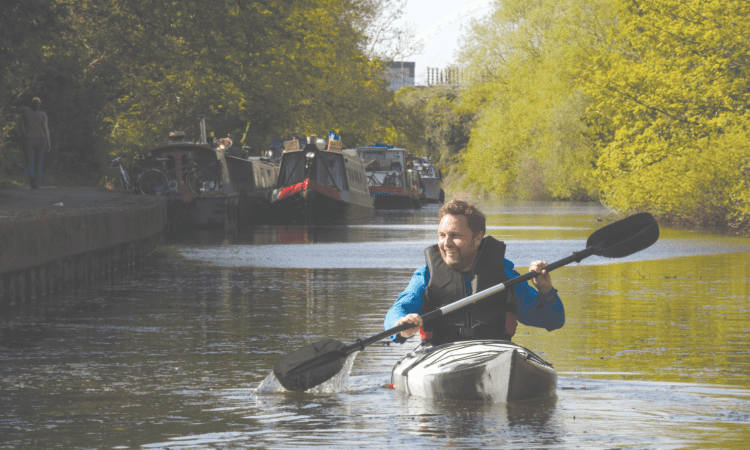 Craig Gunn likes to beat London’s rush hour traffic via ‘canute’. Here he explains how he just goes with the flow on his stress-free journey to work. 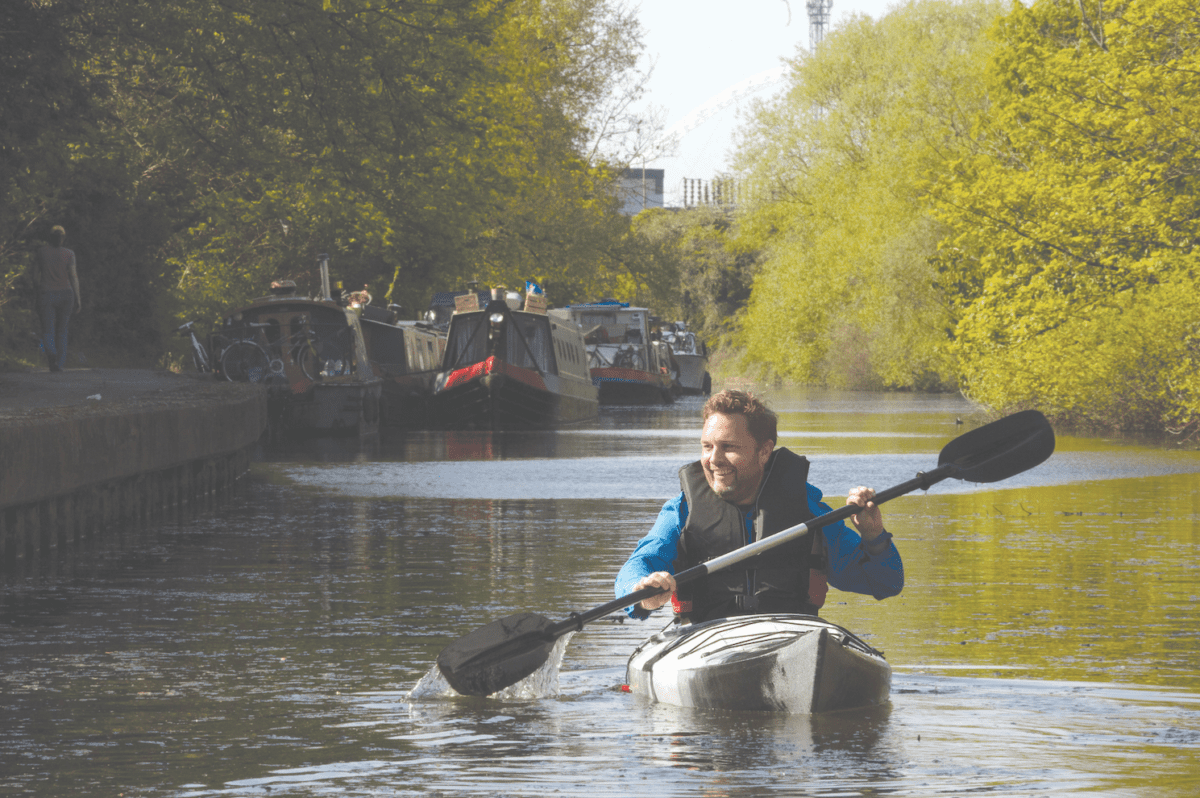 Craig, pictured above, says: “I have lived in Willesden Junction for nearly five years now and one of the main attractions that brought me to the area was its proximity to the Grand Union Canal.

“Over the years I have largely avoided delayed and crowded tube trains, preferring to run or cycle the canal towpaths, which has meant a significantly safer and more pleasurable commute.

“Fate has meant my company has recently relocated to the Paddington Basin, just three miles away from home. This has made me the envy of colleagues as I live really close by, reducing my commute time to just 13 minutes by train on the Bakerloo Line, a 16-minute cycle, or a 27-minute run. However, these sporting distances are not a stretch for me so I have decided to revitalise my childhood passion and ‘canute’ to work.

“As a teenager growing up on Canvey Island, one of my summer leisure pursuits was kayaking. On warm summer days I could often be seen paddling around the estuary waters in my glass-fibre kayak – salvaging old inflatable tyres, lifebuoys, fishing gear, nets and ropes and basically anything I could tow home and fill up my parents’ garage with.

“Twenty years on and before I hit the water again I thought (my wife thought) some refresher training was in order. For safety reasons, I definitely advise some solid training.

“I did a two-day course with the Phoenix Sailing Club on the Welsh Harp Reservoir. I found the course really good fun – it gave me my confidence back and muscle memory on learning my D-Sweep, reverse paddle and safe evacuation drills – which literally came flooding back – although my arms, shoulder and back were particularly sore, something I think will be easier once I start this exercise regularly.

“Course done – kayak arrived at home. All ready to go; however I did still have some trepidation about this largely solo pursuit, so let’s consider some of the negatives.

“Obstructions under the water, such as vegetation and fly-tipping, can cause hazards and also kayaks and canoes are not allowed in locks, so anyone travelling this way will need to walk their vessel around a lock of which there are 71 in the London region (about 100 miles of waterways).

“Likewise, with tunnels, you have to do a bit of prep in advance because some aren’t navigable by such a small boat. You can also catch leptospirosis (Weil’s disease), and while rare, it is recommended paddlers take necessary precautions and understand the symptoms.

“Also, you have to be prepared to share the water space with boaters and other users, as well as all the wildlife (I have found coots to be particularly aggressive and curious on the water).

“Above all else wear a lifejacket, and carrying a whistle and some form of communication in a waterproof bag is useful, with safety hats also advised.”

Health benefits of the canute

Craig continues: “I purchased a touring kayak, which has some storage for longer treks and a stabilising rudder, which I sourced from Cambridge Kayaks for £415. The cost also included a spraydeck (waterproof skirt), paddle and lifejacket.

“Before you hit the water you also need certain credentials. I purchased an annual membership to British Canoeing at £45, which includes a £10 million third party public liability insurance coverage and more importantly a waterways licence, which allows paddlers to access more than 5000km of waterways. My skills refresher course at Welsh Harp was £115.

“My total initial outlay so far has been £635 – which by my calculations is around the same cost as my hybrid road bicycle, and as I pay £2.40 for each tube trip, it would take around 264 trips to make it cost-effective.

I’d probably recoup that in two to three years. A clear mind and fitter body are health benefits that outweigh the simple cost.

“Ahead of my official start date for work, I decided to take advantage of sunny bank holiday weekend weather and trial run my ‘Canute’.

“I carried my kayak from my shed the 100 metres or so to the canal and local landmark, the ‘Collective’ building, to launch off. A few bruises and sore shoulders a day or so later had me reaching for the small dolly you can buy so that I can easily wheel it. 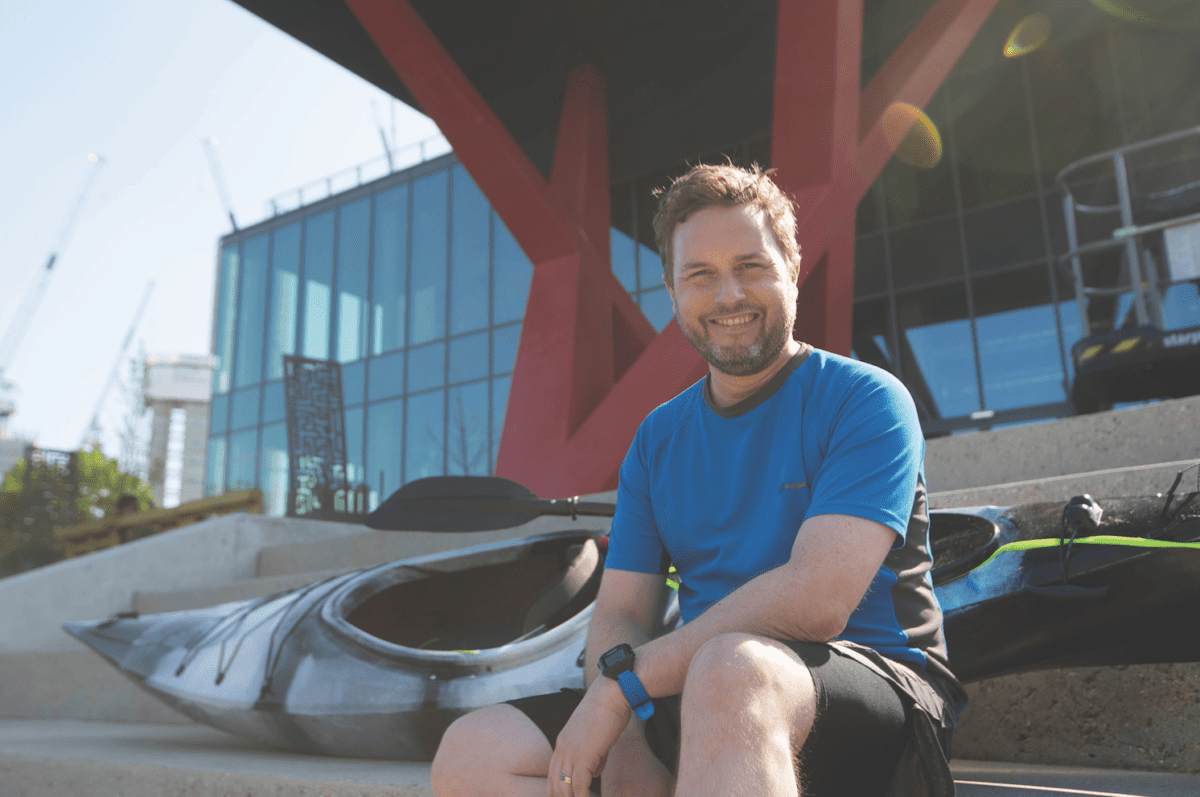 “The trickiest part of this whole process is entering and exiting the water. Using a small rope, I firmly attach the boat to the dry dock and, holding the paddle for support, gingerly step in without a hitch. Getting out however was a much more unstable affair, and after a few wobbly moments I flopped on to the bank unceremoniously like a beached whale – something I’m going to have to learn to ‘style out’ when arriving at Paddington during commuter rush hour.

“Once I’m on board my childhood knowledge and recent refresher training means I am off, mostly in a straight line with the use of the occasional foot pedal and rudder movement.

“The journey begins in passing the end of the Crossrail line and a dozen or so pristine new trains waiting interminably for the start of the Elizabeth Line to my right and the often-smelly recycling ‘Powerday’ plant passes on my left.

“Things get a little less industrial as I pass vehicle retailer Cargiant and into the Kensal stretch of the canal (which includes passing abandoned jetties at Kensal Rise cemetery, once used for the transportation and delivery of the dead) derelict water towers and an array of temporary and permanent narrowboats.

“I see plenty of wildlife: swans, coots, moorhens, cormorants flying over, a solitary heron perched on a car tyre and well-fed rats by the bins at the Ladbroke Grove Sainsbury’s.

“I also recently captured a plate-sized turtle basking on some overhanging tree branches, a survivor no doubt from the ’80s when people were purchasing Teenage Mutant Ninja Turtles – who either escaped using their Ninja skills or kids simply couldn’t look after them and flushed them into the great unknown.

“The route is idyllic in places, especially where the trees overhang and Riviera residents sit on their Juliet balconies drinking morning espresso.

“In other places, where graffiti and shopping trolleys converge, my paddle draws from the water and disturbs some algae, a noxious smell wafts up to wake me and the bow of my boat cuts through floating plastic bottles and nondescript sludge.”

Part of the solution

“Pollution is a massive problem on the waterways with the Canal & River Trust spending £1 million a year to clear litter. They have teams out daily as well as dedicated volunteer groups, collecting towpath and floating litter.

“Paddlers are in a unique position to help the amount of plastic in our waterways. Action charity Surfers Against Sewage is mobilising more members to become part of the solution in tackling litter and there has been a surge in paddlers taking to the water and banks to collect boat-loads of rubbish from otherwise hard to reach places.

“Active 360 – based in Paddington, Kew, Hampton, Richmond and Brentford – offer stand-up paddle boarding (SUP) sessions, which can be used for just sightseeing or water-based yoga and pilates during the summer.

“They have also been organising and helping with clean-ups with their Paddle & Pick events. Participants can get free use of equipment, including a short lesson if required, in return for getting involved in clearing a section of canal of plastic waste.

“Next to the waterway I pass close to the Westway road, a long elevated dual carriageway section of the A40 trunk road in west London running from Paddington to North Kensington, and feel the closeness of packed cars in traffic. I take my journey mostly as a solitary traveller passing the odd cyclist or runner and friendly waving narrowboat resident.

“As I draw close to my destination, I glide through Warwick Avenue under a couple of small bridges, the Canal & River Trust HQ and the picturesque Little Venice adorned with its cafe boats and landscaped borders – a premium spot for residents and tourists alike.

“As I head into Paddington Basin the Victorian-designed architecture makes way for the modern destination hotspot of Merchant Square with its plethora of trendy bars, restaurants and towering office blocks – some very much still developing.

“I finally reach the end of the waterway by Paddington mainline station and disembark on some very low dry docks. Lucky for me we have a serviced lift to a subterranean car park and I have arranged permission to leave my  vessel there.

“It is a bit of a hassle taking it out of the water constantly and I need to investigate if keeping it on the canal is viable and if mooring fees are involved.

“My exercise was complete for the day – the journey was a lot of fun but not the quickest. The last thing I needed to do was name my trusty vessel.

“The narrowboats on the canals have such soft names, written in brightly coloured and traditional fonts – Marigold, Bluebell and Wanderer. However, I thought of something a little more contemporary – so over a few beers I named it ‘Usain Boat’ – although ironically, it and I combined have created the slowest vessel (four miles per hour) on the waterways. When commuting becomes this pleasurable…why rush?

“Since this first draft, I have renamed the boat, Selma. Selma Kayak and yes it now has its own hashtag on Instagram.”