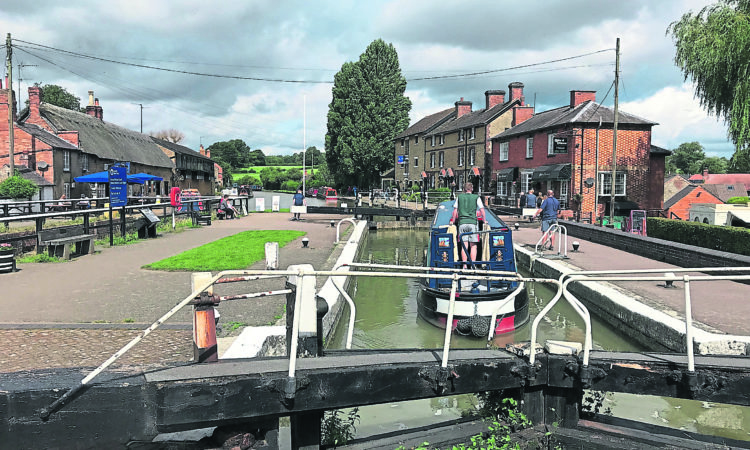 Nicola Lisle continues her museum series by exploring the pretty canal village of Stoke Bruerne and its museum!

UNTIL the late 18th century, Stoke Bruerne was a tiny hamlet in an ancient Northamptonshire parish with little more than a cluster of picturesque cottages, farmhouses and a church surrounded by fields and meadows.

Then, in 1793, the canal arrived, cutting through the heart of the village and transforming it from a peaceful backwater to an industrial hub with bustling wharves and an eye-catching flight of seven locks.

Today Stoke Bruerne is equally busy as a tourist attraction and has managed to retain plenty of its olde worlde charm, making this one of the prettiest canal villages on the network.

Stoke Bruerne’s past is brought vividly to life in the Canal & River Trust’s Canal Museum, which also explores the story of the Grand Union Canal and Britain’s canal network.

One of the oldest canal museums in the country, it opened in 1963 in a restored corn mill – minus the distinctive tall chimney that once dominated the canalside – and its original displays were formed from the collections of former canal engineer Charles Hadlow and former lock keeper Jack James. Hadlow was appointed the museum’s inaugural curator, with James as the first caretaker.

Perhaps one of the most fascinating aspects of the museum is the way it captures the boat people’s way of life, from their living and working conditions to examples of traditional canal art.

The art of painting on to tin or wooden objects began in the boatyards, where at least one of the workers would be responsible for painting lettering and ornate designs on to boats, developing a personal, individual style that indicated where a boat docked. These skills would be passed on to other workers, who would also develop their own style, and many painters became known for their distinctive artwork.

An important part of canal art, it seems, was painting quickly and spontaneously, with bold brushstrokes, one colour overlapping another, before finishing off with a gloss varnish. This spontaneity is part of the charm of the boat worker’s art.

Examples of canal art at the museum include bowls, pans, stools, cabinets, picture frames and other useful or decorative objects.

You can also see a range of everyday objects from the boat people’s working and domestic lives, from tools to cooking equipment, and find out how they managed without running water and proper sanitation. Despite the hardships, though, many enjoyed convivial evenings at canalside pubs, swigging beer and singing along to an accordion.

The narrowboat Sunny Valley, originally built for Birmingham-based coal contractor Samuel Barlow Coal Company Ltd, is on the first floor, and a peep inside gives you a good idea of the cramped but cosy living conditions of its occupants.

A highlight of the museum is the display of model canal boats, including a model of a wooden horse-drawn fly boat from the Aire & Calder Navigation, and an experimental motor boat Progress, built for the Grand Union Canal Company in 1934.

Some objects have a quirky story behind them – like the bicycle ridden by local boat man Bill Whitlock. The Whitlock family carried cargo along the Grand Union Canal on two boats, Renfrew and Lucy, steered by Bill Whitlock’s wife, Rose, and her cousin Laura. It was Bill’s job to race between locks to do the lock-wheeling in readiness for the ladies arriving with the boats!

The museum includes a cafe and gift shop, as well as a second-hand bookshop.

Moored just outside is the museum’s 1935 boat Sculptor, a former Grand Union Canal Carrying Company boat, which is currently being restored, with the interior being refitted and repainted as close to its original appearance as possible.

The village itself is full of interest. It’s worth a walk along the towpath to see the working locks, explore the nature reserve, take the kids pond dipping, enjoy the woodland walk with its wildlife sculptures, take a boat trip and have lunch at one of the canalside pubs.

A short walk from the museum is the Blisworth Tunnel, which at 2811m is the third-longest tunnel in the UK (after the Standedge tunnels in Yorkshire and Dudley Tunnel in the West Midlands), the longest in Europe and the ninth-longest in the world. Completed in 1805, after 11 years in construction, it is also wide enough for two narrowboats to pass in opposite directions.

Stoke Bruerne is a delightful place to be, especially on a sunny day, and there is so much to see and do – for adults and children – that you could easily spend the day here. To find out more, visit canalrivertrust.org.uk/places-to-visit/stoke-bruerne