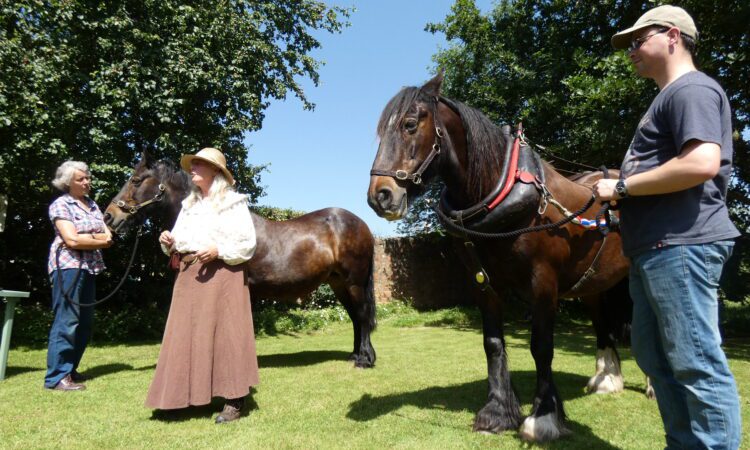 Come and meet Bonny and Bilbo, Britain’s most widely travelled boathorses on the canals. See them being harnessed up. Hear many “Short Tales about Long Tails” as Sue Day tells of adventures on her travels over 40 years with horsedrawn boats on canals.

Sue is the Chairperson of The Horseboating Society which was founded in January 2001 to promote and preserve the heritage and skills of this once common form of transport.

Bonny, 29 and Bilbo, 27 are now in semi-retirement due to their advanced years, and rather than doing long distance journeys, the horses now do short demonstrations of horseboating at canal events.

Bonny first came to Stoke Bruerne in 2000 when she pulled NB Maria on a charity and heritage journey from Manchester to London. She returned in 2005 to celebrate the bi-centenary of Blisworth Tunnel pulling Sunny Valley.

Her brother Bilbo first visited Stoke Bruerne in 2008, attending the Gala Festival with NB Elland, giving towing demonstrations on the locks. He returned on more occasions, with NB Angel and in 2013 with NB Kildare in the centenary year of the boat (the butty to steamboat President).

Since the end of July, except for a short trip to do a demonstration at Ellesmere Port, Bilbo and Bonny have been delighting visitors to Stoke Bruerne while chomping their way through grass in a meadow beside the canal.