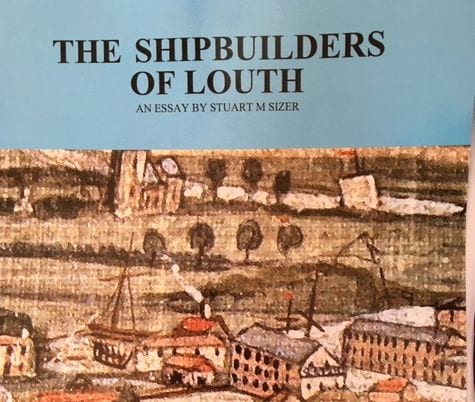 WHEN Louth author and historian Stuart Sizer first researched the history of his local canal, he concentrated on the construction, personalities and businesses and not the craft using the navigation.
A visit by the direct descendants of the Nell family who travelled from New Zealand to see where their ancestors lived and worked sparked an interest in the shipbuilders at the Riverhead – the terminus basin.
With the help of research by Patsy Williams and Alick Nell, Stuart also turned to the internet and they discovered that a John Martin from Gainsborough established a business close to Top Lock in around 1796. And in 1799, chronicler John Cragg visited Louth and saw a vessel being built at the Riverhead.
Shipbuilders of Louth brings together records of the vessels which plied their trade along the canal and those that were built there from sources including the Universal British Directory, census records, Pigot’s, White’s and Kelly’s directories and newspaper reports and advertisements in the Stamford Mercury which is said to be one of the country’s oldest titles, having been published under that masthead since 1712.
A timeline follows the evolution of this local industry from 1767 when the first cargo, of coal, was transported and the official opening of the Louth Navigation in 1770 to c1823 when Richard Nell and Samuel Wray both operated shipyards.
Stuart follows the fortunes of the shipbuilding families who also included the Smiths and George Sleight who were listed in Pigot’s directory of 1822. William Brown’s Panorama of Louth (1844-1847) which is on display at the Louth Museum, also shows the shipyards at the Riverhead.
There are descriptions of the types of craft built including Humber sloops, cutters and keels. Louth was said to have had a class of its own specifically for use on the Navigation and in the Humber ports such as Hull, Barton, Grimsby and Goole. They were recorded as 72ft long by 15ft wide.
Pictures and drawings illustrate the vessels and tools used in their construction. In the appendix is a list of shipbuilders up to 1900 and over 50 named ships as well as the family trees of the Wrays and the Smiths.
This informative book is a must for anyone interested in the history of not only Louth Navigation and the town itself but how the canal opened up the town to waterborne freight to and from the Humber ports and further afield.
Shipbuilders of Louth by Stuart M Sizer, softback 57 pages, has been published by the Louth Navigation Trust as part of the 250th anniversary celebrations, Canal@250, and is available from the trust, £6.50 plus P&P, via its website at www.louthcanal.org.uk
ISBN: 978-0-9536451-2-1