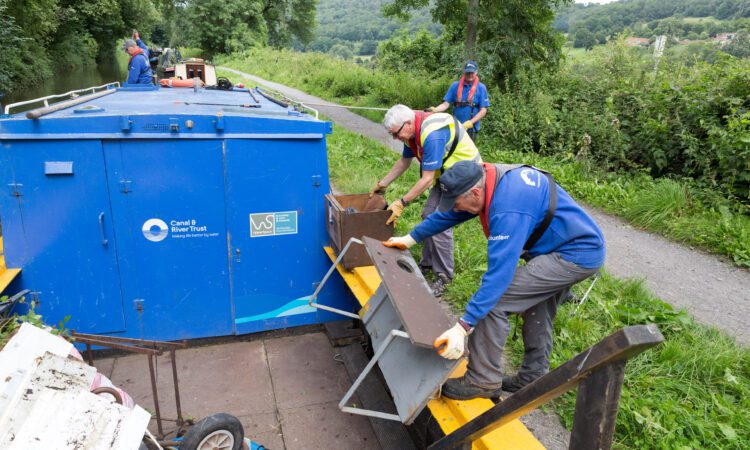 Boaters on the Kennet & Avon Canal having problems disposing of their rubbish got some help from waterways charity the Canal & River Trust today (17 August). The Trust’s first refuse collection boats set off from Bath and Bradford on Avon to meet at Dundas.

The 40’ long work boats, Sulis and Vale of Pewsey, travelled along the canal on a two-hour journey stopping to collect the rubbish along the way.

Each year the Trust spends more than £10k collecting rubbish from three sites along the waterway. The majority of this is general waste but there are many larger items from boats, such as old fridges, sofas and stoves, that should be taken to the tip. It’s often hard for people to get these taken away or to get to local refuse sites. So, every three months, the team at the Canal & River Trust will be taking the tip to the boaters.

As Lee Brain, area operations manager for the Canal & River Trust, explains: “With more people living along the canal it is inevitable that more refuse will be generated. Over the last four years the amount we’re collecting has doubled. Sadly, we have also seen an increase in fly tipping. We’ve been clearing around 25-30m3 of fly tipping a week – the equivalent of two large construction skips – from sites along the Kennet & Avon Canal.

“Our ‘floating tip’ is intended to help our boating communities to keep the Kennet & Avon looking its very best and at the same time taking waste away so it does not go to landfill . We look forward to seeing how much we’ve collected on our first trip.”

The ‘tip boat’ is part of a Canal & River Trust project focusing on the western end of the Kennet & Avon Canal. A new ranger was recently appointed to give information and advice to people on the water and towpath, check signs, carry out smaller repairs and generally keep this linear park a welcoming and attractive place for everyone.

Later this month (26 August) the Trust will be inviting people to an open afternoon to find out more about the Kennet & Avon Canal, get advice on boats and boating and generally chat about concerns and questions regarding the waterway.