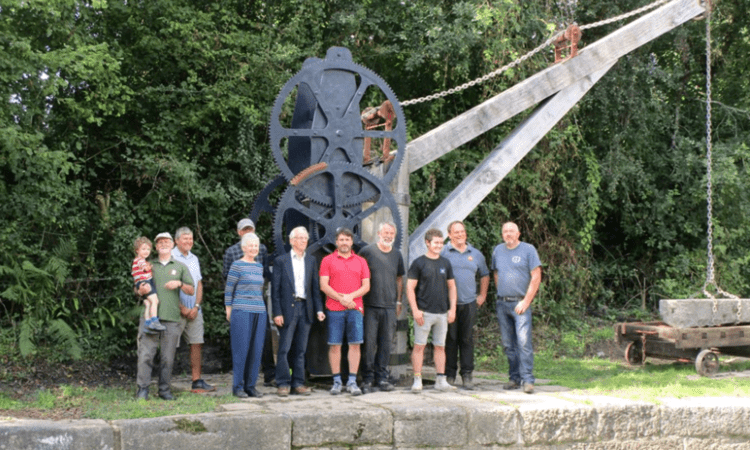 AN ICONIC crane has been reconstructed on the Stover Canal to help tell the story of the canal’s unique history.

IWA provided a major part of the funding for the Stover Canal Trust project through its South West Inland Waterways Regeneration Fund. The replica crane was unveiled by IWA’s Dr Ruth Sewell in September.

This unveiling is particularly timely for IWA and its heritage campaign as it further underlines the importance of protecting waterways heritage, which can so easily be lost forever.

The original crane was an imposing structure, which was situated at Ventiford Basin, the terminus of the two-mile long Stover Canal in the village of Teigngrace. The crane was used to transfer huge granite blocks, sometimes weighing up to three tons, from tramway wagons onto barges. The loaded wagons came from quarries at Haytor on Dartmoor via a seven-mile Granite Tramway, with rails carved out of granite. The barges then took the granite down the canal to the port of Teignmouth, where they were transferred onto vessels, mostly bound for London.

The granite was used in the construction of many notable structures and monuments including London Bridge and the British Museum.

Specifying the design and dimensions of the replica crane was no easy task. The granite business ceased in the 1850s and thereafter the crane and the Basin became redundant. The wooden components of the crane above ground rotted away and most of the cast iron elements of the mechanisms used to rotate the crane and raise and lower the granite blocks were removed.

Luckily, the part of the crane that was below ground was preserved and that, along with the discovery of a photo that showed a significant part of the crane structure above ground and an historic print of a similar crane used at Teignmouth, meant that it was possible to build a faithful, albeit static, reconstruction: the rotating and other mechanisms have not been restored to working order.

The wooden elements of the replica were made from a single oak tree sourced in North Devon. The eight-sided central column is almost 6m tall, of which about half is below ground level in a granite-lined pit 3m deep. Together with the 6m-long jib and 4m-long supporting strut, the timber components weigh over 2.5 tonnes. The replica raising and lowering mechanism is made of steel and incorporates fragments of the original iron work.

The timber sawing and carpentry and the metal work were all carried out to a high degree of precision by local craftsmen, based on detailed drawings by the trust’s vice-chair, Paul Taper, a retired engineer who carried out much of the research into the original design.

IWA has provided significant funding for this project, which along with the wider restoration of the Ventiford Basin has taken several years and many hundreds of volunteer hours to complete. The Basin has become a popular visitor attraction as a result of the restoration, which has included the archaeological excavation of three abandoned canal barges which were uncovered when silt was removed from the Basin, the recently constructed Stover Trail, and a foot and cycle path which runs alongside the canal.