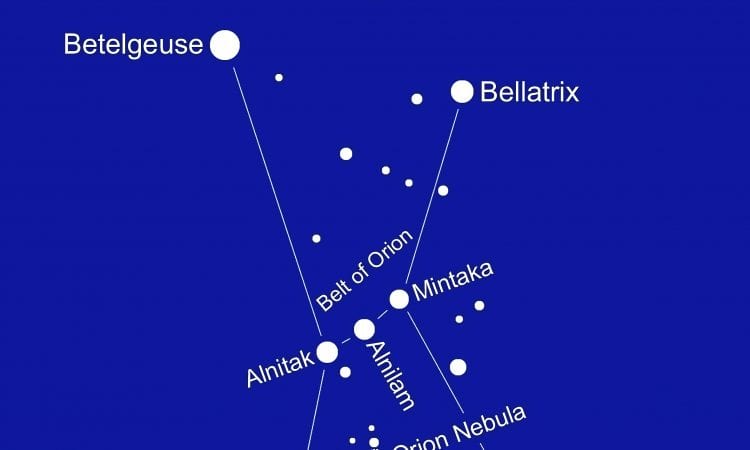 Towpath astronomer Brian Jones features one of the easiest to spot constellations in the winter sky.

THE magnificent Orion is arguably the most beautiful constellation in the sky. Visible high above the southern horizon during winter evenings, its conspicuous and unmistakable pattern of bright stars is easy to see, even if your boat is moored in an urban location. 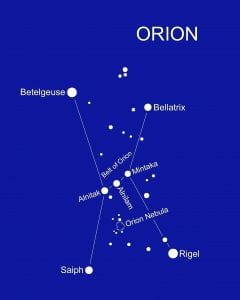 Greek mythology tells of the mighty hunter Orion who boasted far and wide of his prowess and who declared himself a match even for the gods. This angered Diana, the goddess of the hunt, who challenged Orion to a hunting match, a challenge which Orion gladly accepted. He and Diana spent many days in the chase, but in the end there was nothing to choose between them, and the contest was declared a draw. Once more Orion bragged and, in a fit of anger, Diana commanded a scorpion to crawl out of the ground and kill him. She then placed the mighty hunter among the stars where he can be seen to this day.
One of the most conspicuous stars in Orion is the red giant Betelgeuse. This is one of the largest stars known to astronomers and, if Betelgeuse occupied the position of our Sun, its outer surface would extend beyond the orbit of Mars. The ruddy glow of Betelgeuse contrasts sharply with the brilliant white of Rigel, which is so far away that the light we are seeing from it set off towards us only a few years after the Domesday Book was compiled. Located at the south western corner of Orion, Rigel derives its name from the Arabic ‘rijl’ meaning ‘foot’. The difference between the ruddy glow of Betelgeuse and the brilliant white of Rigel is evident even when viewed with the naked eye and checking them out with binoculars brings out the colour difference between them very well.
Depicting the left arm of Orion, the light from Bellatrix reaches us from a distance of around 250 light years. Even further away is Saiph, the light from which set off on its journey towards us around 650 years ago, which means we are seeing Saiph as it was during the reign of Edward III. Marking the right knee of Orion, Saiph derives its name from the Arabic ‘saif al-jabbar’ meaning ‘the sword of the giant.’
Alnitak, Alnilam and Mintaka together form the famous Belt of Orion. The easternmost of these is Alnitak, the area immediately surrounding which is rich in stars and well worth a closer look through binoculars. Although we know this trio of stars as the Belt of Orion, other names have been given to them in the past, Australian natives referring to them as ‘Young Men’, Greenlanders calling them ‘The Seal Hunters’ and mariners identifying them as ‘The Golden Yardarm’. Perhaps the daftest episode relating to the naming of these three stars took place in 1807 when the University of Leipzig christened them ‘Napoleon’, whereupon an irate Englishman promptly retaliated with the title ‘Nelson’. Needless to say, neither name found its way on to star maps!
Just below the Belt of Orion is a vertical line of faint stars, within which can be found the magnificent Orion Nebula, the most famous object in the constellation and without doubt Orion’s main claim to fame. Visible as a glowing patch of diffuse light, this magnificent object has a diameter of at least 25 light years and lies at a distance of around 1400 light years. Shining because of the energy from hot stars embedded within it, the Orion Nebula is one of the most eye-catching objects in the entire sky, and is clearly visible on dark, moonless nights. It is remarkable that its existence appears not to have been noted until 1611, although since then it has never failed to impress, and it is safe to say that there is little in the heavens to rival it.
The wide field of view of a pair of binoculars brings it out well, and the sight leaves the observer with a sense of wonder when it is realised that, inside this glowing cloud of interstellar gas, new stars are actually being formed.