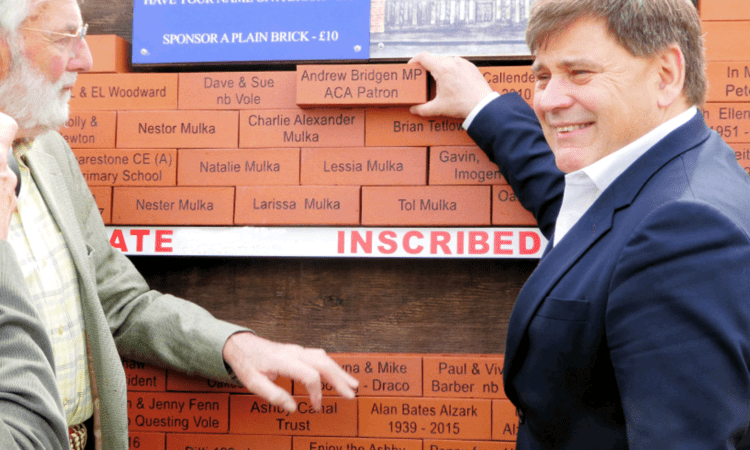 ASHBY Canal Association celebrated a milestone this summer when it reached £50,000 in its ‘Buy a Brick’ campaign.

This will help fund the construction of the aqueduct over the Gilwiskaw Brook, on the length of canal being restored.

Chairman Peter Oakden was pleased to present the latest brick to the association’s patron, Andrew Bridgen MP, who is an enthusiastic supporter of its aims to get the Ashby Canal restored to Measham and ultimately to Moira.

The bricks are on display at Snarestone Wharf, Quarry Lane, at the current terminus of the Ashby Canal. This is the site of the Ashby Canal Association HQ, where its shop sells collectables; hot and cold drinks and ice creams are also available.

The Ashby Canal originally went from Bedworth to north of Moira, but the last eight miles was affected by mining subsidence up until the 1960s. Restoring the canal to Measham is being actively pursued, with plans to connect to the already restored length at Moira as the ultimate aim.
www.ashbycanal.org.uk