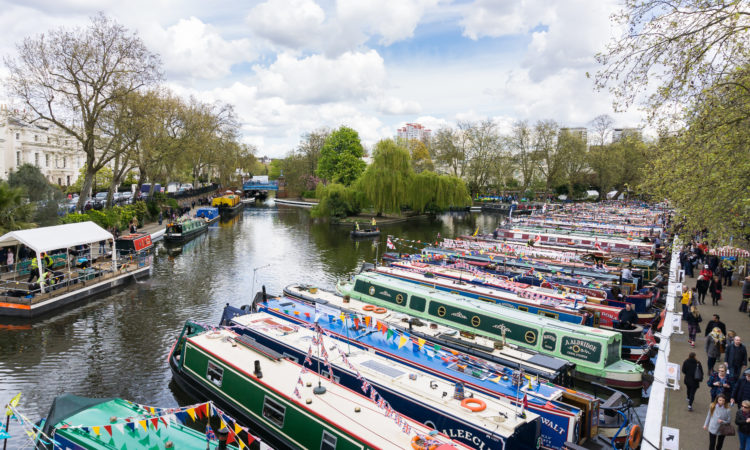 It’s a picturesque corner of West London immortalised countless times on the silver screen – from 60s Swinging London flick Georgy Girl and 80s heist caper A Fish Called Wanda to being the scene of high bear drama in Paddington 2. And now Little Venice has been named one of the Marvels of the Modern Waterways in a poll to mark 10 years since the Canal & River Trust was set up as a charity to look after 2,000 miles of canals and rivers in England and Wales.

Taking its place alongside engineering marvels including a soaring aqueduct in North Wales, a three and a half-mile canal tunnel in Yorkshire and a ‘stairway to heaven’ flight of 21 locks in Warwickshire, Little Venice was picked by Britain’s boaters and canal supporters as worthy of the accolade.

A key interchange on the country’s 200-year-old canal network, Little Venice links Regent’s Canal, the Paddington Arm of the Grand Union Canal and Paddington Basin, next to some of the most recognisable streets in London.

And as well as being a regular haunt of a certain bear from Peru named after the nearby railway station, Little Venice’s showbiz connections don’t end there.

Dad’s Army actor Arthur Lowe, who starred as Captain Mainwaring, is honoured with a Blue Plaque outside his former home at 2 Maida Avenue. And in the past month the area has been introduced to a whole new generation of viewers on CBeebies – as the real-life and animated location for a boat trip episode of preschooler favourite JoJo & Gran Gran.

“The area we now know as Little Venice has existed for more than 200 years but our charity has only been around to look after it for the past ten.

“We are the lucky custodians of a very special part of the capital’s heritage – one which continues to enchant Londoners and visitors of all ages – and we couldn’t do it without our supporters, volunteers and staff.

“Some of us even get to work at the Canal & River Trust’s lovely offices here at The Toll House. We never forget how lucky we are to spend time in a place which is so dear to so many people and recognisable to millions of film lovers.”

“Having served as the arteries that fuelled the Industrial Revolution 200 years ago, today the canal network across England and Wales is busier than ever with boats navigating this unique living heritage. The list of must-see spots the public has chosen showcases the breadth of what the waterways have to offer, from stunning feats of engineering to the growing role canals have as beautiful places to spend time and reap the health and wellbeing benefits of being by the water.

“The creation of the Canal & River Trust ten years ago has been a great achievement, putting the waterways in trust for the nation and continuing the renaissance of this wonderful living heritage that is the finest of its type in the world. The latest chapter in the story is only just underway and brings its own challenges, with the 250-year-old canals vulnerable to changing weather patterns. We are calling on the public and the government to continue to support the waterways so we can continue to protect and preserve this incredible network and avert the decline we saw last century.

“We hope that people will come out and see these magnificent sites and join us in celebrating hundreds of years of canals playing a vital role in British society and the ways they can continue to serve society in the future.”

Today, as well as being visited by around 10 million people every fortnight, the Canal & River Trust’s waterways are used by around 35,000 boats for pleasure, for work, and as homes, with boaters navigating the 250-year-old network in the same way as their predecessors. The Canal & River Trust is committed to preserving this living history and has been able to invest £1.5 billion on its core charitable activities to maintain the waterways in its care since it was formed in 2012.