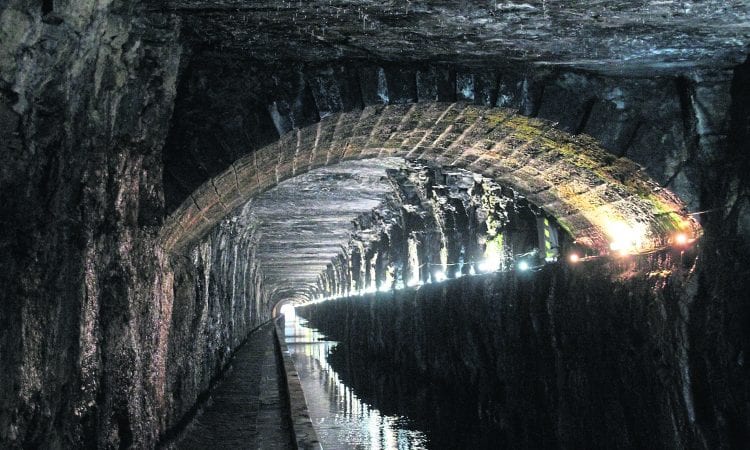 Project manager Steven Berry, Scottish Canals head of operations and delivery and mechanical and electrical engineer for Scotland, is justifiably proud and keen to show off the tunnel at its best.
“We decided to take the opportunity to relight the tunnel and to enhance its features,” said Steven, as he explained how the whole light sequence, changing from heritage white light through greens, blues, reds and purples, takes an hour to run through.
“If you stop to look, you’ll see the light changing along the length of the tunnel wall, and, boaters sailing through will be accompanied by the travelling lights as they make their way along.”

Thump in the dark

Falkirk Tunnel is amazing enough, even without its new lights. Designed by engineer Hugh Baird, it was built between 1818 and 1822, and passes under Falkirk’s Prospecthill.
Navvies dug three shafts, which are still visible, to bore down to complete the 18ft-wide and 19ft-high tunnel, with its 5ft-wide towpath.
And it can be eerie at times. “I was down here on my own one night when the contract was under way,” revealed Steven. “There were no lights, and I could hear a ‘thump, thump, thump,” coming from the other end of the tunnel. I told myself that I couldn’t be hearing anything, but it was there, and I was pleased to get out!”

Steven also pointed out one of the features of the new lighting which makes the reflections on the ceiling in the canal water look like a solid surface, when looking down from the towpath. “It’s quite remarkable,” he said. “It looks so real, but, of course, isn’t.”
The tunnel was built at the behest of local landowner, William Forbes, of Callendar House, who insisted that the Union Canal should not pass through his estate. He was worried that the industrial cargoes on the canal would bring down the tone of his land. As Steven points out, barges full of ‘night soil, the sweepings of the Edinburgh privies’ made their way along the Union for use as fertiliser on local fields, so perhaps Mr Forbes was right to push for the tunnel!
In today’s, thankfully, cleaner world, the imaginative new lighting system makes this historic tunnel more than worth a visit, for the colourful installation brings out the best of an engineering marvel as a tribute to the men who built it.
If you’re visiting the Falkirk Wheel and the Kelpies, tread lightly towards the Falkirk Tunnel, too. You’ll find it very illuminating in every sense of the word.