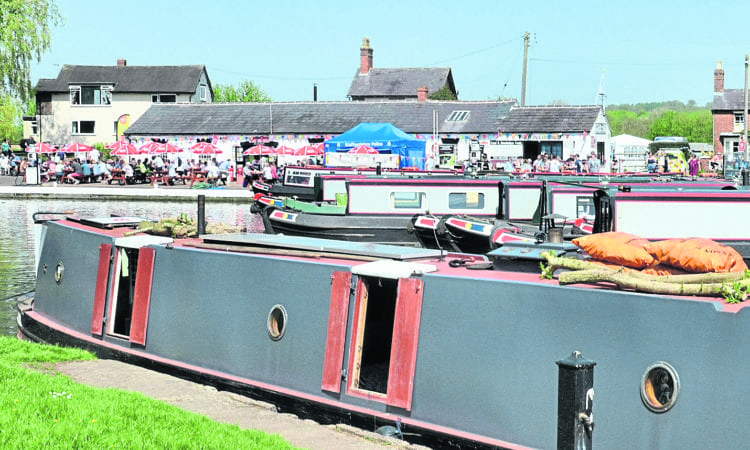 Harry Arnold of Waterway Images looks back with fondness and humour at life on the canals in decades gone by.

RETURNING to Norbury Junction is always nostalgic, as this is the place where in 1965 I first gave up a ‘real job’ and moved on to the canals full-time at Shropshire Union Cruises Ltd. First living on a boat then with our expanding family in the old top lock cottage, by the dry dock, down what we then called ‘the arm’. Soon, as the business expanded, becoming manager.
Part of the expansion was being among (not) the first to build the now common modern box-construction steel hulls. Certainly, to market them under the Cutlass brand name. At Norbury recently for the canal festival, another veteran of the period reminded me of an interesting incident. Not however concerning a hull we built.
Other yards soon jumped on to the steel-hull bandwagon which, with respect, any competent welder could build. One of our friends, who owned the BCN tug Spitfire, replaced it by having a steel boat built at his engineering company. The employee who did it subsequently became a well-known boatbuilder.
Fired with enthusiasm, he reckoned that he could mass-produce small (30ft) cruiser-style hulls in the family factory; a good idea, but somewhat ahead of its time. More importantly, his two brothers decided that building the prototype caused too much disruption to normal production. Some may remember the company for their Snipe boat trailers. So, he asked us if we would sell this hull.
This didn’t take long as one of our regular moorers, the late John Moss, liked it and we completed it as a very nice small craft attractively named Wind In The Willows. Looking ahead, John went on to own the ex-FMC Dragon and – involved with IWA – did much to promote the canal in Stone, for which I subsequently presented him with the association’s Richard Bird medal.
The boat was so small that, when completed, we moved it on rollers to the edge of the wharf, ready to launch the following morning. John Stothert, the late owner of the company – who I will be ever-grateful to – had a friendly chatty personality. Unfortunately, it hid an impetuous nature and a great ability to ‘bodge’ jobs which others who worked with him will testify to.
It had been a long day, everyone was tired, when John rushed over and said let’s launch it now, we can easily push it in. I immediately said no and firmly stated that I would not be involved. But he was the boss. I left for our cottage on the other side of the basin and watched from the bridge opposite. They pushed Wind In The Willows in and within minutes I then saw it sink. There was no weed-hatch cover on and Norbury basin was deep then.
I had to go back and take charge of the situation by first ringing our nearest crane company, Longton Crane Hire in Stoke-on-Trent. The crane eventually arrived and we carefully lifted the boat, pumping out in the process. I said to the crane driver: “I bet this is an unusual job for you”. To my amazement, he replied: “It’s the second today.” One of the Johnson Brothers (Wedgwood) boats that shuttled along the Caldon Canal with pottery had turned over that morning and he had refloated that.
Money laundering?

Compare and contrast the two pictures of the same location – the wharf at Norbury Junction – the top one was taken in March 1965, the one below it during the 2018 Norbury Canal Festival. PHOTOS: Waterway Images

BOATS were not the only things sunk off Norbury wharf during this period. John Stothert’s latest edition new Jaguar saloon – seen in the top photograph above – also had a ducking. His wife Jenny had left it parked at right angles facing the canal, trapping in the firm’s van which one of our staff needed.
He reversed the car, parked it, and sat in the van. To his horror he watched the car slowly pass before his eyes on its way into the canal. It was an automatic and he hadn’t set the parking brake correctly. It was lunchtime and I was again crossing the bridge opposite and heard just a ‘tink’ as the back bumper clipped the wharf edge.
I repeat, it was deep then, and the car was virtually submerged. Incongruously, through the back window, clothes and bank notes could be seen floating around. Jenny had been to both the laundry and the bank for the wages. After recovery, my wife Beryl spent quite a few hours drying bank notes in our gas oven. As for the car, which went back to the factory – unlike Wind In the Willows – it was never the same again.