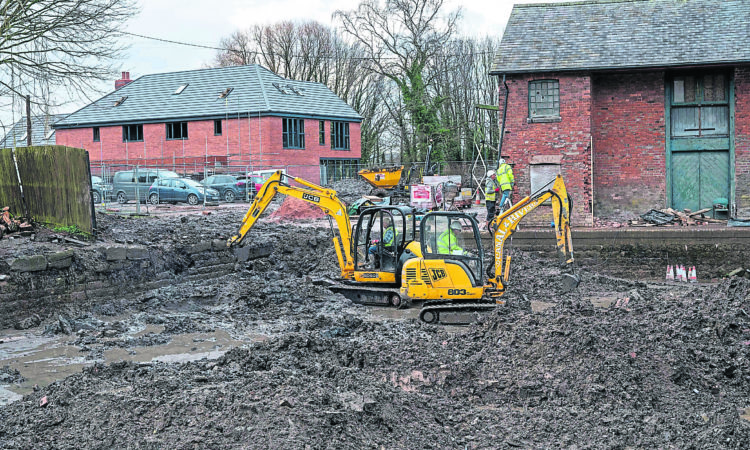 IT IS reasonable to assume that, across the country, most canal restoration projects came to a standstill during the lockdowns.

And that they have all, to a greater or lesser extent, suffered due to the materials shortages that came afterwards. As a result, projects have been set back, but as restrictions began to be lifted, activity has started again.

Among those working on projects is the Shrewsbury & Newport Canal Trust, a group of more than 50 dedicated volunteers who have toiled in the mud, cold, wet and sometimes freezing conditions to restore the unique buildings and canal basin at Wappenshall in Shropshire.

Thought to have at least been partly designed by the then local engineer Thomas Telford, whose revolutionary iron bridge stands just a few miles from Wappenshall, the basin and its buildings are inching ever closer to fulfilling the trust’s aim of becoming a hub for the local community and providing museum space devoted to the man himself.

The work at Wappenshall is being carried out under the watchful eye of the trust’s chairman Bernie Jones and John Heather, the project manager. During an interview with a local paper, Bernie said: “But for the want of £1 million, we could have this project completed in 18 months!”

An amusing remark that doesn’t do justice to the amount of hard work and effort that has been put in and still needs to be put in by the dedicated band of people who have been turning up on Fridays and Saturdays. On average, 10 to 15 people attend and numbers have recently been boosted by the four young people taking part in the Duke of Edinburgh Awards scheme who now help out regularly.

Despite the holdups, the progress that has been made over the last few years is significant. Recently 101 concrete slabs have been laid on a waterproof membrane to form the basin floor. Two thousand five hundred cubic metres of silt and debris have been removed from the basin, with another 250 cubic metres still to be removed.

The creation of two berms, to keep the water when it is eventually allowed into the basin, and the building of retaining walls to avoid any potential breaches are just some of the achievements. The hope is that water will be back in the basin towards the end of this year; fingers crossed!

With two Woolwich Class narrowboats currently being restored by other group members, it is hoped that the volunteers don’t come up against any last-moment obstacles that delay the re-watering.

Despite a lot of work taking place outside, renovation work is still taking place on the two wharf buildings, the smaller of which will become a coffee shop with a meeting room above, open to all visitors. The hope is that local groups will look to use the space for meetings etc. The second, and larger, building will be restored to provide an exhibition space. The Ironbridge Gorge Museum Trust will be involved in using the space to create a rolling exhibition on the life and work of Thomas Telford.

The volunteers have achieved a great deal during the last couple of years and it will be a testament to the hard work when water is, once again, in the basin. The Wappenshall group is not unique. Across the country, there are groups of people who care passionately about their waterways heritage and who work just as hard to restore and maintain their chosen part of it. Without them, most of these locations would be lost forever.