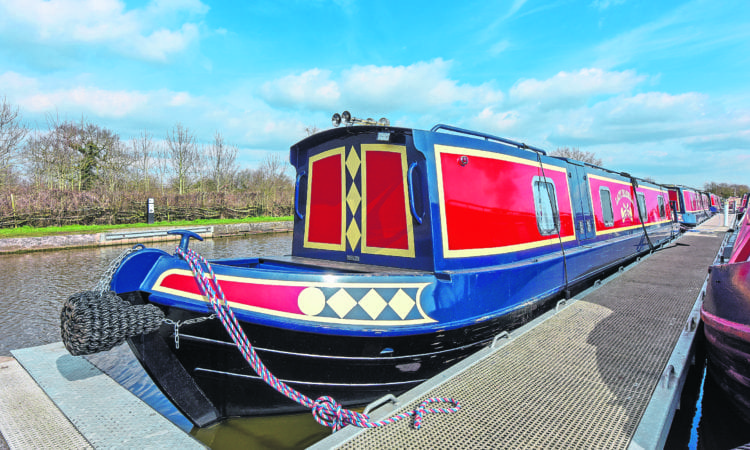 HAVING been operating for the last five years with the boat stock that came with the business Venetian Hireboats, Phil Roberts and his wife Maxine have now embarked on a process of replacement assisted by their team based at Cholmondeston near Nantwich, writes Phil Pickin.

Lady Isabella (or Issy as she’s known) is the first in this process and entered the small, but expanding, hire fleet of five boats in April. The next new boat is due later this year.
This new line of boats has been fitted out in-house to their design, one that is aimed at offering ‘the most spacious, comfortable and beautiful boat in the industry’. So we went along to take a look to see if Issy lives up to this  ambitious aim.
Issy is a 50ft cruiser-style boat with distinctive styling to the forward cabin sides. This gentle curve is unusual but mirrors the lines of the hull. Finished in predominantly dark blue and red, the new boat looks smart and compact. 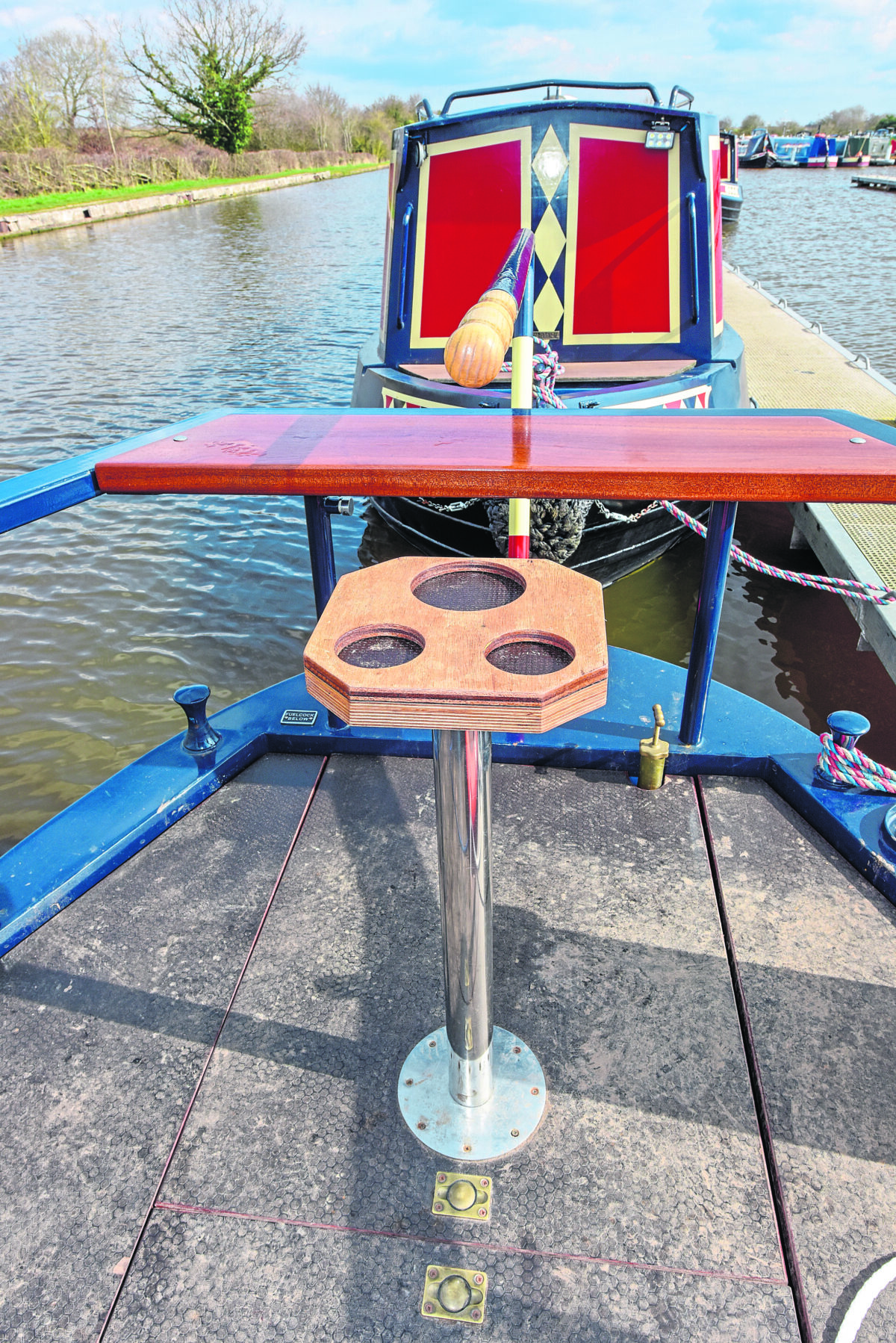 The good-sized stern provides plenty of room with a couple of handy additions including a wooden insert to the stern rail which provides a useful seat, and a floor mounted cup holder (although it’s designed for glasses and bottles more than cups).
You enter the boat via the galley which has been designed as a walkthrough with sweeping curves to the worktops and the units beneath. But the galley begins before you get this far into the boat. The fridge, microwave and second ‘beer/bottle fridge’ are located either side of the steps down from the stern. The addition of a second fridge is to save cold air being lost from the main one each time you help yourself to a drink. This is part of the reason why it’s located so close to the helm!
Inset into the grey granite worktops are the stainless steel sink opposite and a four-burner hob, below which is the grill and oven. The pale colours of the worktops complement the white ceiling and marine vinyl-finished cabin sides above the gunwales. 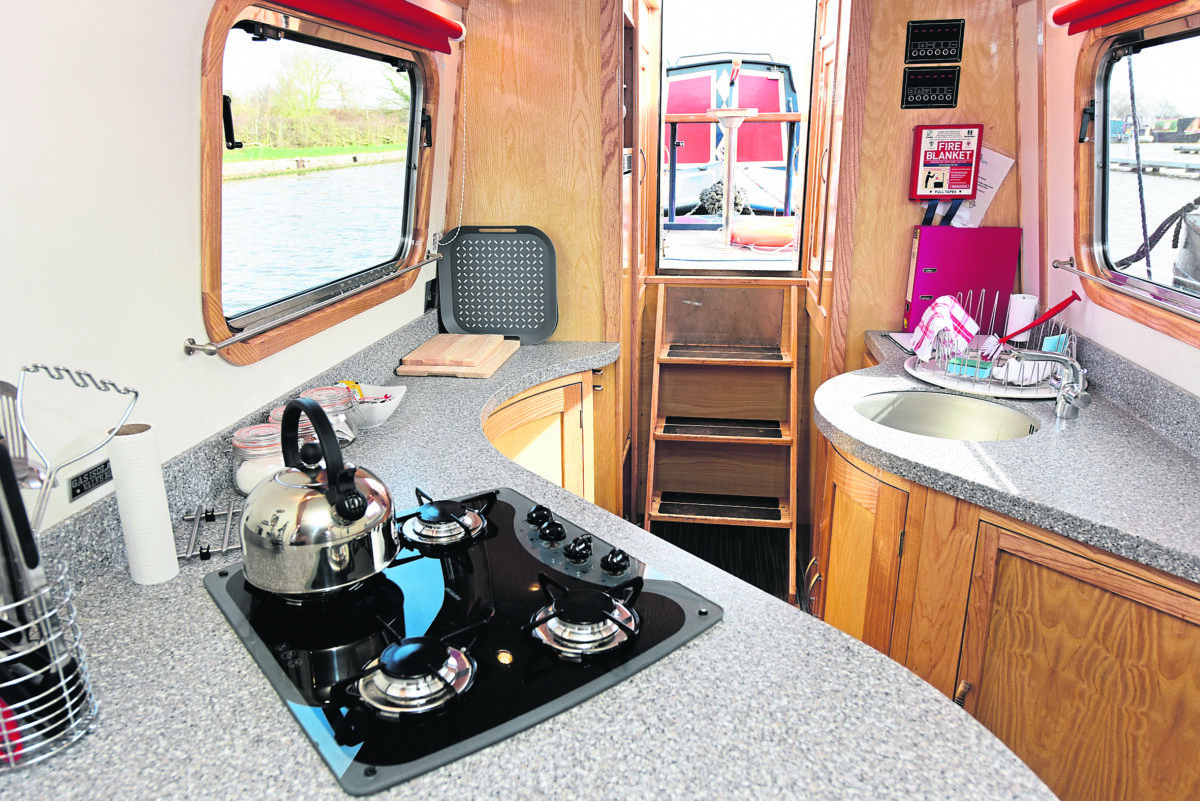 The use of pale ash and chrome window frames also helps Phil and Maxine to achieve the aim of not having the interior too dark.
Given that this is a hire boat, cutlery, crockery, saucepans and cooking utensils are provided, as are tea-towels, washing-up liquid and cleaning materials along with useful kitchen items such as waste bin, replacement liners, rubber gloves, and the welcome pack comprising tea, coffee, sugar, milk, bacon, eggs, bread, beer and wine to the customer’s selection.
The main living area isn’t fitted with fixed furniture. Instead, they’ve opted for free-standing leather reclining armchairs and footstools. A 21in TV with DVD player, Freeview and a USB input is mounted to the internal wall above a shelving unit, and the room is heated via a sizeable radiator on the adjacent wall. As with most boats, it’s lit via a series of LED lights inset to both sides of the ceiling and, once again, the pale colours and large windows provide plenty of light. The salon is also fitted with a USB plug-in charger socket for laptops and phones, something becoming commonplace both at home and  while holidaying.
The bathroom is a walkthrough and has the same curved work surface as the galley. The room is spacious and includes a Dometic Sealand toilet with two pump-out outlets in case of blockages. There is also a full-sized quadrant shower unit, while a Rak wash basin and chrome mixer taps sit above a storage unit with curved doors and integral toilet roll holder. Adjacent to this is the door into the bedroom. 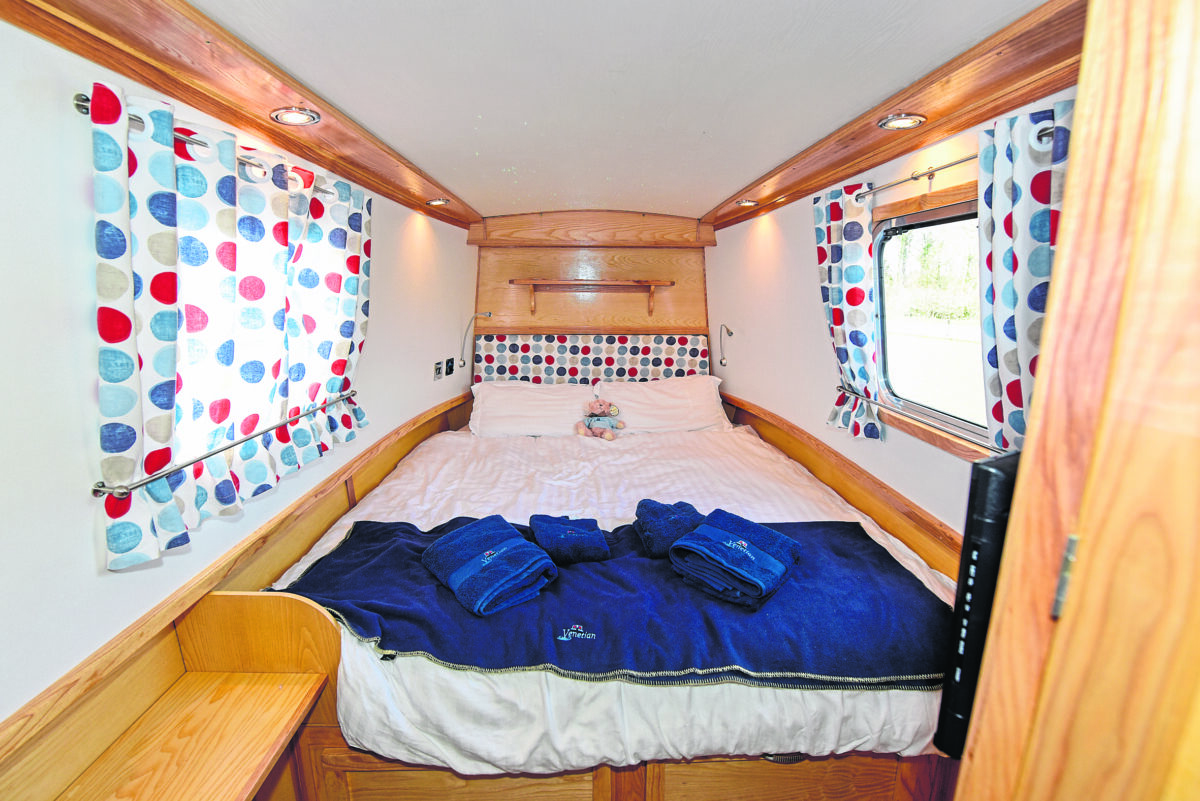 The bedroom is fitted with a king-sized bed 6ft 6in wide and 6ft 6in long. A 9in thick ‘Coolmax’ memory foam mattress sits on top of the bed base, which provides not only additional storage but also an 800-litre water tank and dual water pumps. The reason for the dual pumps is to ensure that the flow of fresh water isn’t interrupted or reduced when more than one tap is turned on. Two water pipes, running almost the full length of the boat, provide the water supply for this innovative system.
What is described as an ‘in bed TV’ is fitted to the side of the wardrobe in the bedroom, a wardrobe that also houses the Alde central heating boiler. This can be controlled by a switch panel next to the bed. These controls enable you to switch on the central heating and all of the various lights without the need to get out of bed; ideal in cold weather.
The most unusual feature on Issy is the inclusion of a multi-coloured LED star map built into the ceiling above the bed. Apparently, the colours of the lights vary with sound and, I would imagine, it would look quite spectacular at night or when the ambient light levels are low. This is just one of a number of interesting innovations incorporated into the design of Issy, many of which have come from Phil and Maxine’s own experiences of hiring boats, and as the saying goes, ‘nothing beats experience’.

You can see a video of the interior of Lady Isabella here: