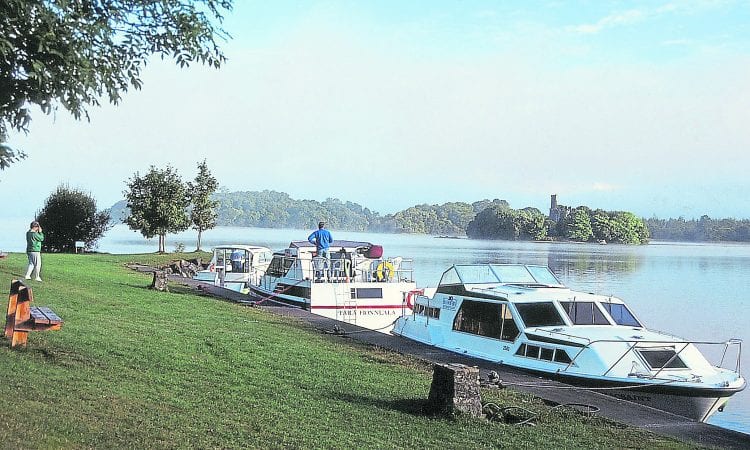 THE woodlands and islands of Lough Key in County Roscommon have played their part in Irish history, inhabited by chieftains, religious orders and  wealthy landowners. 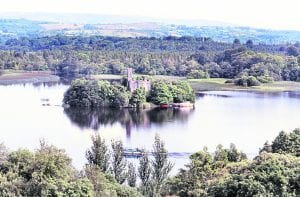 Known in mediaeval times as Moylurg, it was ruled by the McGreevy and MacDermot clans, whose castle stood on The Rock – now known as Castle Island – along with another residence on shore. Ancient annals record that MacDermot’s castle was struck by lightning in 1187.
In the 17th century the estate was granted to the King family from England under the Cromwellian settlement and renamed Rockingham.
Famous architect John Nash was commissioned to design a new mansion – Rockingham House – in the early 19th century and landscaper John Sutherland created the landscape park which became their private playground.
This house was destroyed by fire in 1957 and the land was taken over by the Irish state. A concrete viewing tower called the Moylurg Tower was built on the site in 1973.
I heard about the more recent history from my guide Danny Shanley (pictured below left), who has worked for Lough Key Boat Tours for over 20 years and gave me a tour by speedboat of the lough and its islands.

A folly was built on Castle Island (below) in the early 19th century but it was also gutted by fire around the time of the Second World War. An oak tree in the front is said to date from the 14th century. 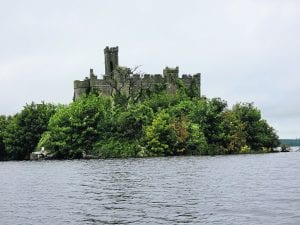 Danny told me that the Irish band U2 tried to buy the castle in the mid-1990s when it was estimated that it would cost around £3 million to restore. In 2007 Kevin McCloud of TV series Grand Designs visited the castle, the repair bill having by then risen to some £30 million.
Lough Key Boats provided the transport for a more recent visitor to the island, Sir Bob Geldof, during the filming in early 2016 of a documentary about poet WB Yeats, who is understood to have been a visitor himself in 1895.
Another island with a historical past is Trinity Island, which is the site of one of two religious foundations on Lough Key and a love story resembling that of Romeo and Juliet. It is the final resting place of Una Bhán MacDermot who, according to legend, died of grief, having been forbidden from marrying her lover Tomás Láidir Costello from a rival family. He is also buried there, having died from pneumonia after swimming to the island every night to keep vigil at her grave.
Building started on the monastery of White Canons in 1161 and finished in 1221. Danny told me that a stash of 180-year-old gold coins were found in the walls by the Office of Public Works. More excavations are due to start there next year.
Ruins of a 9th century church and a mediaeval friary can be found on Church Island where a female saint is said to be buried. There is also an old monks’ pier where we sheltered from the rain.
Our tour also took us past Orchard Island, used as a campsite by the scouts, and Bullock Island, so named as previous owners, the O’Harmon family, used to raise cattle there. The 13-acre island recently went on the market with a guide price of €50,000.
There were originally more than 30 wooded islands in the lough, which is 5km long and 3km wide, but since the creation of the Shannon-Erne Waterway some are now under water.
As the rain worsened we took shelter on the River Boyle from where a short arm links it to Boyle harbour before we returned to the Lough Key harbour overlooked by a visitor centre with a cafe and ice cream bar boasting great views over the lake, a gift shop and  restroom facilities.
Lough Key Forest Park also contains a number of attractions, some dating from the time the park was part of the Rockingham Estate, and others from when the park was developed in the 1970s. These include the ice house, gazebo, ruined church, stables, tunnels, the bog gardens, wishing chair, the fairy bridge, Drummans bridge and the deer paddock. In addition, there are a number of short canals that are lined with walkways.
You can find all the information you need about the various activities on offer in the 800 acres of parkland from zipping through the forest and walking the treetop canopy to an adventure play kingdom for little explorers. There are more than 30 miles of walking, cycling and Segway trails as well as historical tours of the estate. 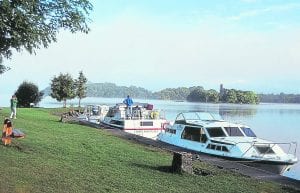 Visit Lough Key – Information:
Loughkeyboats.com
loughkey.ie
woodlandsegway.com
By car
Lough Key is on the N4 Dublin to Sligo Road and is 17km from the N5 Dublin to Westport Road. The town of Boyle is only 5km from Lough Key, which links to the N61 Roscommon/Athlone Road.
By train
Boyle Train Station is on the Sligo – Dublin Route. Information: www.irishrail.ie
By bus
The town of Boyle is serviced by a number of bus routes: Information from Bus Eireann at www.buseireann.ie
By boat
Lough Key is part of the Shannon-Erne Waterway. Information: Inland Waterways Association of Ireland: www.iwai.ie and Waterways Ireland: www.waterwaysireland.org
By air
Ireland West Airport Knock is only 40 miles from Boyle. Information: www.knockairport.com
Parking
There is no charge for exploring the many trails throughout the park and estate. The car parking fee goes towards the maintenance of the trails, grass cutting and the disposal of refuse. If you spend €20 on attractions, food or gifts in the visitor centre, then car parking is free.