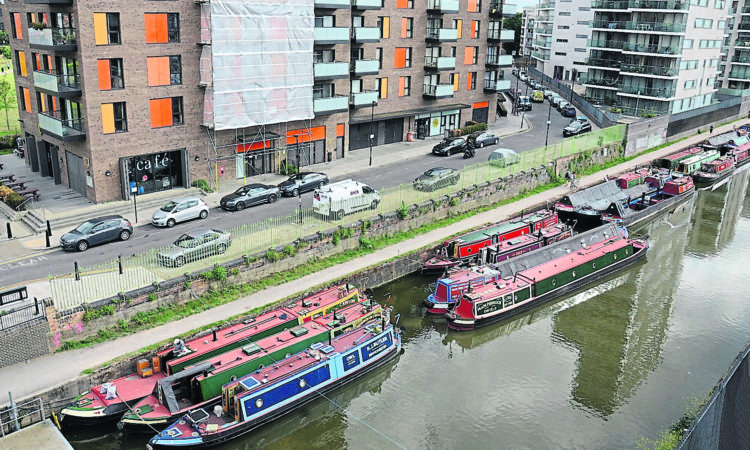 LONDON’s Limehouse Cut had a slightly different look to it at the end of May when 31 historic boats came together for one of the Historic Narrow Boat Club’s ‘campaigning’ gatherings.

Like Brownhills and Hebden Bridge in previous years, the London event had the dual purpose of shining a light on a less frequently boated or lesser appreciated part of the system while showcasing historic boating to the general public

The meticulous organisation by Michael Pinnock, Nicola Day, Sue Cawson and Ray Butler, meant that everything went off without a hitch, despite initial concerns about negotiating the capital’s crowded waters.

After a Friday evening of wetting whistles and whetting appetites, the weekend proper kicked off with visits to the House Mill at Three Mills Tide Mill, followed by an evening slide presentation from Tim Lewis – The Limehouse Cut & Environs in Old Photographs, a fascinating glimpse into the working past of the area and the many trades and industries that had once flourished along the banks of these waterways.

Sunday and Monday allowed for members to cruise around the Bow Back Rivers − a rare opportunity to visit waterways seldom available to the public.  There were variously routed circumnavigations around the Olympic Park but all allowing great views of the huge stadium, now home to West Ham United, and of Anish Kapoor’s extraordinary sculpture, Olympic Slide.

No HNBC gathering is ever complete without the quiz and Peter Oates, having had two years of Covid-enforced no quizzing, set a particularly fiendish one to round off an excellent event on Sunday night.

Having ventured this far into the capital some members took advantage on the Monday by heading onto the Thames and the Lee & Stort, with a few even venturing down to a rather choppy Gravesend!

Nick Grundy reports: Over the years we have been nearly everywhere possible with the full-length Beatty (built for Samuel Barlow by Yarwoods in 1937) but we had never been through the Thames Barrier at Woolwich. The HNBC weekend tied in with a St Pancras Cruising Club trip to Gravesend along the Thames estuary, so here was the perfect opportunity to write another chapter in Beatty’s remarkable cruising history.

The boat was well prepared for a tidal passage and we had a glorious early morning run downriver with six other boats, passing through the Thames Barrier at 6.30am, then under the QE2 bridge at Dartford before arriving at Gravesend where we moored on the inside of the floating jetty. After the day and evening at leisure, and a busy night adjusting fenders and ropes to cope with passing ships’ wash, we were set for the return trip the next morning.

It was wind over tide which made for an uncomfortable hour or so. We departed on the first of the flood tide which involved a tricky crossing to the north bank of the river with rolling waves and even a few white horses!  The boat coped well in these conditions, but the amount of movement is certainly an unusual sensation in a narrowboat. We returned safely upriver to Limehouse − a five-hour run and with the photos to prove it.

Many thanks to St Pancras Cruising Club for the excellent planning and organisation. We made some new friends and feel a real sense of achievement.’