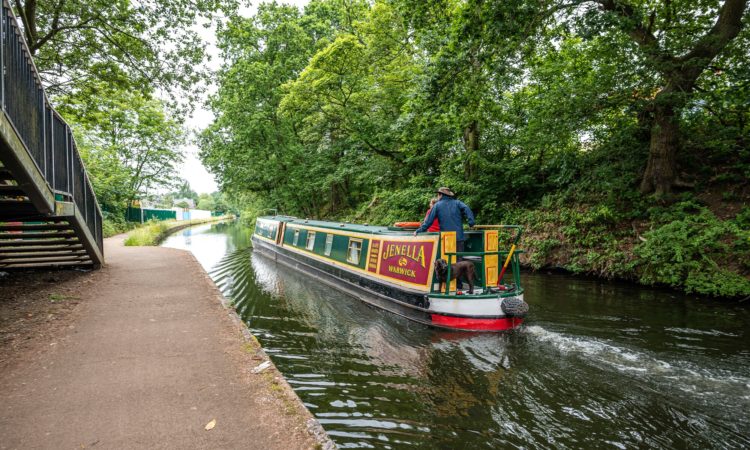 The Canal & River Trust is announcing that over a quarter of its canal and river navigations, including urban canals in Manchester and Sheffield, Commonwealth Games-ready waterways in Birmingham, and semi-rural stretches of river in Leicestershire and a navigation in Yorkshire, have been newly awarded prestigious Green Flag status by Keep Britain Tidy.

As the waterway and wellbeing charity celebrates its tenth anniversary it secured a further 125 miles of Green Flag waterways across England and Wales, with 565 miles now holding the international quality mark for parks and green spaces. The Green Flags further demonstrate the renaissance of the nation’s 200-year-old canal network after a decade of being looked after by the charitable sector.

The Midlands saw seven new sites being awarded Green Flags, including sites in central Birmingham and Walsall as the community got involved in showcasing the waterways ahead of the Commonwealth Games. In Manchester and Sheffield, once unloved stretches of urban canal have been transformed into pleasant, wildlife-rich places for the surrounding communities to spend time. More rural stretches along the River Soar and Calder & Hebble Navigation were also recognised. The Kennet & Avon Canal, Macclesfield Canal and Monmouthshire & Brecon Canal, together with Royal Albert Dock in Liverpool, the first marina in England to hold a Blue Flag, retained their status, along with 35 other sites.

The spread of Green Flags reflects both the increasing importance of the waterways as vibrant green spaces in the nation’s towns and cities and their longstanding value in providing popular, accessible beauty spots across the country.

Richard Parry, chief executive at Canal & River Trust, said: “As we celebrate our tenth anniversary, we’re delighted that over a quarter of our network now holds Green Flag Awards. It’s a testament to everyone who works or volunteers with the Trust, including those in the community who play such a vital part in helping to look after their local canal. The Green Flags showcase the breadth of what the waterways have to offer: the growing role canals have as beautiful places to spend time and reap the health and wellbeing benefits of being by the water. And this barely scratches the surface: with waterways offering free, accessible blue and green space on the doorstep of millions, everyone can find their own special place.

“The past decade since the Canal & River Trust’s launch has seen a generational change in the number of people volunteering on the canals. The five million hours of time our volunteers have given has helped us achieve incredible feats like the Green Flags that now grace 50 stretches of our waterways, making life better for the communities they run through.

“The latest chapter in the story is only just underway and brings its own challenges, with the 250-year-old canals vulnerable to changing weather patterns. We are calling on the public and the government to continue to support the waterways so we can continue to protect and preserve this incredible network and avert the decline we saw last century.”

Commenting on the news that 50 stretches of the Canal & River Trust’s waterways have met the Green Flag Award standard, Keep Britain Tidy’s Accreditation Manager Paul Todd said: “I would like to congratulate everyone involved in making these waterways worthy of a Green Flag Award.

“Canals and rivers are vital green spaces for communities across England and Wales. These awards are testament to all the hard work of staff and volunteers, who do so much to ensure that they maintains the high standards demanded by the Green Flag Award.”

Canals are an intrinsic part of the nation’s landscape with the quintessentially British sight of a narrowboat, lock or a humpback bridge familiar to anyone in towns or countryside alike. Today, as well as being visited by around 10 million people every fortnight, the Canal & River Trust’s waterways are used by around 35,000 boats. The Canal & River Trust is committed to protect and preserve the waterways in its care since it was formed in 2012.

The Green Flag Award scheme, managed by environmental charity Keep Britain Tidy under licence from the Department for Levelling Up, Housing and Communities, recognises and rewards well-managed parks and green spaces, setting the benchmark standard for the management of green spaces across the United Kingdom and around the world.

Details of how to volunteer or donate money to support your local canal can be found at: canalrivertrust.org.uk.