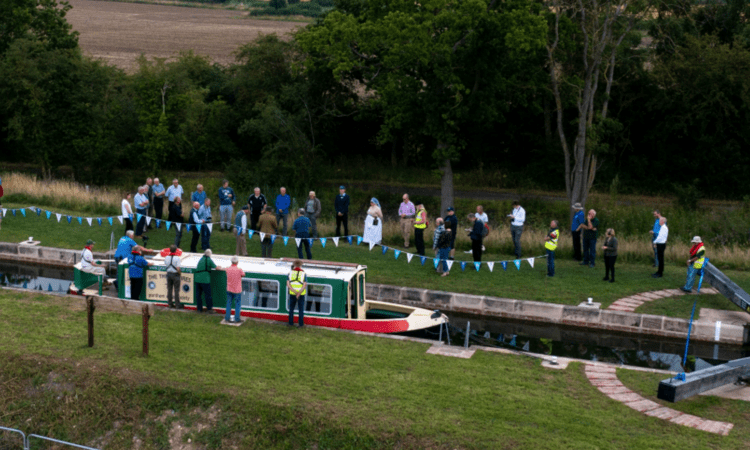 VOLUNTEERS who have spent the past three years rebuilding a canal lock by hand are celebrating after it was used by a boat for the first time in more than 90 years.

The Canal & River Trust, Grantham Canal Society (GCS) and the Waterway Recovery Group have been working together on the formerly derelict Lock 14 near Stenwith.

Since 2018, the volunteers have been taking the crumbling walls down brick-by-brick, laying new foundations and rebuilding the walls. Volunteer works had to stop during the lockdowns of 2020 but that didn’t slow the progress too much with the Canal & River Trust using the time to lift new oak lock gates into the restored lock chamber – the first new gates the lock has had in almost 90 years.

It has been part of a project – awarded a £830,500 grant from the National Lottery Heritage Fund – to bring locks 14 and 15 back into use. The project has already seen the full restoration of Lock 15 which was officially reopened in September 2019.

The locks were designed and built by renowned canal engineer William Jessop over two centuries ago, but fell into dereliction after use of the canal declined in the face of competition from the railways. By the 1960s most of the locks on the canal were derelict and their lock gates replaced with concrete weirs to control the water levels.

The new oak gates have been hand built at CRT’s lock gate workshop at Stanley Ferry near Wakefield. Each of the bottom gates weighs 2.3 tonnes with the top gates weighing 1.1 tonnes each.

Phil Mulligan, regional director for the Canal & River Trust, said: “This has been a monumental effort from everyone involved and the official opening was an emotional experience for them all.

“The events of the past year may have slowed progress slightly but it’s certainly not dampened the enthusiasm and commitment of the cvolunteers. The lock’s looking incredible, back to its best, and it was a real honour to see a boat using it for the first time.

“It’s a really inspirational project and we’re so grateful for all the efforts of the volunteers and the support of the National Lottery Heritage Fund.”

Mike Stone, chairman of the Grantham Canal Society, said: “The completion of lock 14 restoration has been a real highlight of an otherwise difficult year for GCS, our volunteers have worked with the Trust and WRG to complete works despite covid-19 restrictions and site closures.

“The volunteers have been completely focused and the result is fantastic with the fifth of seven locks in the flight now restored, there was much learning from lock 15 and we look forward to taking that learning to locks 12 and 13, and we thank all involved in making this possible.”

The project has also involved training volunteers in valuable conservation skills and laying the groundwork for the restoration of a further two locks (numbered 12 and 13). In addition to the NLHF funding the project has also received support from WREN, Donald Forrester Trust, the family of Alan Applewhite, and Michael Worth on behalf of the Waynflete Charitable Trust.

As well as the physical works the aim of the project is also to raise awareness of the canal’s built and natural heritage and encourage more people to explore it through walking trails, archaeological activities, on-site information and online resources.