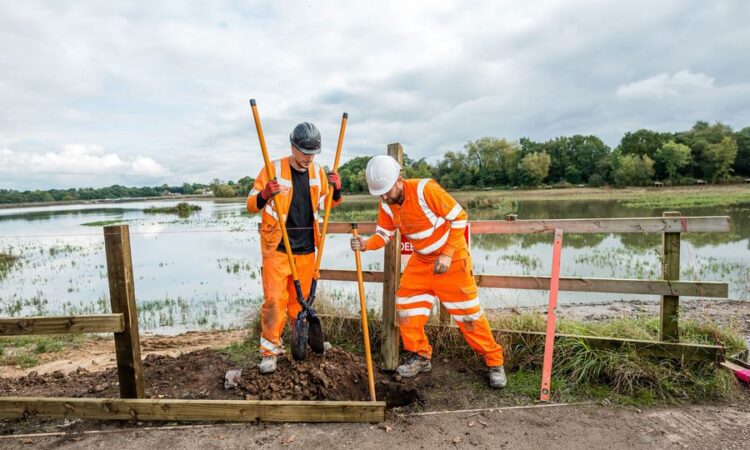 THE Canal & River Trust is close to completing its £1.6 million programme of improvements to the reservoirs at Earlswood near Solihull.

Needed to ensure the reservoirs are compliant with reservoir legislation, the works have included strengthening the core of the main dam along Valley Road to improve its resilience during flood events.

The lakes at Earlswood consist of three reservoirs – Terry’s Pool, Windmill Pool and Engine Pool – built in the early 19th century to supply water to the Stratford Canal. Together they occupy 70 acres and are popular with people from across the West Midlands for walking, fishing and sailing.

CRT project manager Ian Bogges said: “We have completed the majority of our planned works at Earlswood Lakes. As well as strengthening the reservoir dams, installing drainage in the embankment and dredging the Canal Feeder Channel, we have also upgraded two major sections of footpath, added new angling platforms and wildlife habitat enhancements.

“These habitat improvements include: coir roll soft bank protection planted with native plant species along the canal feeder channel; securing waste wood in Windmill Pool for invertebrates and fish within the water and to provide a step up over the metal piles for wildlife.”

As part of the reservoir improvement project, the footpaths alongside the left bank of Engine Pool and right bank of Windmill are being widened and resurfaced to make them accessible all year round. They are due to fully reopen by mid-November. The trust will be looking at ways to fund further footpath improvements at the lakes in the future.

The lakes are now refilling with rainwater, allowing sailing to resume, and the temporary works compound in Malthouse Lane Car Park is being dismantled. Wood Lane car park will remain closed until mid-November, when the trust’s final inspections are complete.

CRT’s contractor Kier reopened Malthouse Lane Causeway and the Crest Road above the dam alongside Valley Road as planned on October 15.