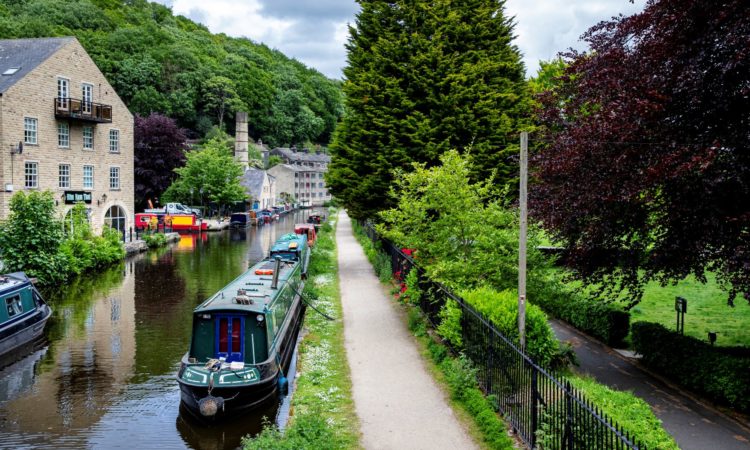 Britain’s first trans-Pennine canal, the Rochdale Canal, celebrates the 20th anniversary of its full restoration this month (July).  Once an artery for trade during the industrial revolution, the canal is a haven for people and wildlife connecting Manchester city centre to Sowerby Bridge in West Yorkshire.

The 218-year-old canal includes some of the finest industrial heritage in the world and requires constant care and support from the public, partners and funders to help the Trust protect and keep it open.  To celebrate the special date, The Trust is calling on more people to join its campaign #ActNowforCanals to help look after the canal, from fundraising and volunteering through to picking up the occasional piece of litter whilst out for a walk

Over the last two decades, the regenerated waterway has been the catalyst for huge improvements in people’s lives. Derelict Victorian cotton mills and warehouses have been converted into ‘des res’ waterside apartments and new communities are thriving around the canal.

Sections of the canal in Manchester city centre and Yorkshire have recently been awarded prestigious Green Flags – illustrating their importance as quality green spaces for local people and home to much loved and support of wildlife, and major Green Recovery and art projects earlier this year have resulted in new rainbow planters in Manchester’s Gay Village, floating reed beds, more trees, flowers, wildlife and art installations.

Particularly valuable in urban areas, the canal towpath offers people a traffic-free space to roam and connect with nature. Community projects, such as the Incredible Edible garden scheme in Todmoden, have sown the seeds for a major canalside movement to grow free fruit and vegetables for people to pick. And partnership projects working with organisations like Transport for Greater Manchester have resulted in new access ramps to the towpath and in Yorkshire a new joint promotion with Northern Rail aims to open up the canal to rail users.

Richard Parry, Canal & River Trust chief executive, said: “The positive benefits for people and wildlife resulting from the restoration of the Rochdale Canal in 2002 are amazing. It has been the catalyst for hundreds of brilliant projects, schemes and developments which have transformed the urban and rural landscapes around the waterway.

“We believe that no other charity brings as much free, open and accessible blue green space to the doorsteps of so many people. And we want to keep it that way by protecting and preserving these special places and ensuring canals don’t fall back into the dark days of dereliction and decline.

“The Rochdale Canal is a wonder of industrial engineering, however it has particular challenges, not least the effects of floods and drought from a changing climate, and still ongoing work, at a time of spiralling costs, to make the canal more resilient following decades of decline during its closure in the 20th century.  We need support from the public and partners now more than ever and are calling on the Government to recognise the scale and range of benefits that waterways deliver by ensuring they secure sufficient long-term funding.”

First opened in 1804, the Rochdale Canal was the trans-Pennine motorway of its day, busy with barges carrying coal, wool, cotton, grain, cement, salt and timber between Lancashire and Yorkshire, feeding the demands of the Industrial Revolution.

Trade boomed on the canal until the beginning of the 20th century, when the development of railways and road transport led to a dramatic reduction in barge cargo and the canal was officially abandoned in 1952. In the latter half of the 20th century, sections became derelict, filled-in, bridges lowered and the M62 motorway built across its line.

The seemingly crazy aim of restoration began in the mid-70s when a few enthusiasts formed the Rochdale Canal Society. This sparked off a major multi-million pound partnership project, involving British Waterways (forerunner of the Canal & River Trust), all the local councils, Inland Waterways Association and others taking advantage of public funding opportunities around the Millennium. Work included the creation of a new channel under the M62, a new canal tunnel under the A627(M) roundabout, 12 new road bridges and the refurbishment of 24 locks.

Fast forward half a century from the bleak 1950s and on 1 July 2002, John Craven, TV broadcaster and vice president of The Waterways Trust, re-opened the Rochdale Canal at a victorious VIP reception at Dukes 92 in Manchester. Later in the day, famous TV steeplejack Fred Dibnah performed a similar ribbon cutting ceremony at Ben Healey Bridge, near Rochdale.

To find out more about donating, volunteering, exploring the Rochdale Canal, and how to get involved in the #ActNowForCanals campaign, go to the Canal & River Trust website, canalrivertrust.org.uk/actnowforcanals