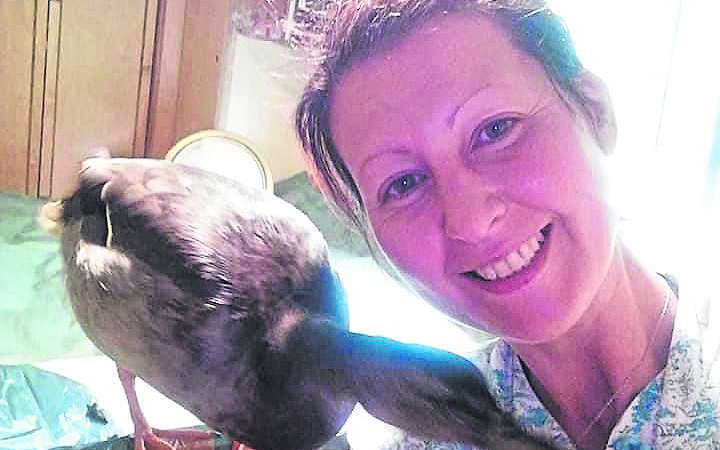 ORIGINALLY hailing from the Spanish Atlantic coast, Lena Rodriguez grew up in a culture very much entwined with boats and the sea. It is perhaps no surprise, then, that she has spent the past nine years as a continuous cruiser aboard her 40ft narrowboat, Infinity, here in the UK.

Having moved to the UK in 1999, Lena also spent time in the Netherlands – another location known for its canal history – and boats seemed to be written into her future. “To me, seeing boats as homes was very natural and it was a dream of mine to get myself on to the water once I came back to the UK from Holland.”

Lena spent some time researching but the shift into doing didn’t happen until she sadly lost her mother unexpectedly. “That changed my perspective, of how to live life in the present as tomorrow is not guaranteed. Dreams are to be lived.” Very quickly she obtained her helmsman qualifications and travelled around until the right boat appeared.

Nowadays Lena lives happily aboard with her two babies: a cat named Whiskey Boo and, rather unexpectedly, a mischievous duck called Howie! “I have raised Howie since he was two days old and he causes the most hilarious reactions from passing boaters when they see him looking out of the window!”

Howie arrived on the scene during lockdown when Lena noticed his abandonment. “In the evenings I gathered the whole family together as I threw food into the water, but his mum and siblings kept pushing him away.” In the end, Lena decided to step in and he has since been raised aboard. “Several issues have become apparent over time as to why he was ousted by the family. He does not fly, or like water.” Lucky for Howie he is now living his best life with a constant supply of cherry tomatoes and Lena’s loving attention!

Having the company of her furry and feathered friends is important as Lena works from her boat, too, under the business name, Infinity Boat Covers. “I repair boat covers and custom make new ones.” While Lena had considered doing this when she first moved aboard, her idea didn’t fully take shape until Covid hit. “As we were moored at the same place for a few months, fellow boaters saw me making the cratch covers for my boat and also for my partner’s boat and slowly they started asking me to work on theirs.” Lena soon applied for her trader’s licence and two years later feels blessed to still be growing her business.

Lena isn’t always in one place though as she has a true wandering spirit. “The only time I have spent in the same mooring was during the pandemic. We were in Leighton Buzzard and while I loved it there, after a while that same tree is in the same place, and you end up seeing the same people day in, day out and you just feel like you are going to die a bit inside because routine is a killer, at least for me.”

As someone else with a gypsy soul, this resonates deeply, as does Lena’s love for nature. “I’m pagan, nature is my church so it makes sense that I feel more at home and at ease surrounded by countryside. There is a magical connection to the environment that allows me to discern the little changes throughout the year that make up the seasons.”

I can personally vouch for the joyfulness that is Lena, as well as for her super sewing skills. She recently spruced up my extremely tired cratch cover with new panels and zips when we were lucky enough to cross paths on the Grand Union for a second time. Within two days she had wandered along the towpath to see me, taken away our cover and returned it renewed. I was so blown away with the quality, as well as Lena’s warm, honest nature, I asked her to do some extra repairs before we both continued our journeys in opposite directions.

Covering anywhere between Leighton Buzzard and Whilton Marina (including the Northampton arm) and taking the occasional job in West London and surrounding areas, Lena is always open to requests! “It is my passion for this amazing lifestyle that motivates me to keep trading. I feel I have something to offer my community and feel so blessed to help.”

Lena has met and made many meaningful connections and friendships through her work and travels and I, for one, hope you readers will also have the pleasure of experiencing her warm character on your own journey!