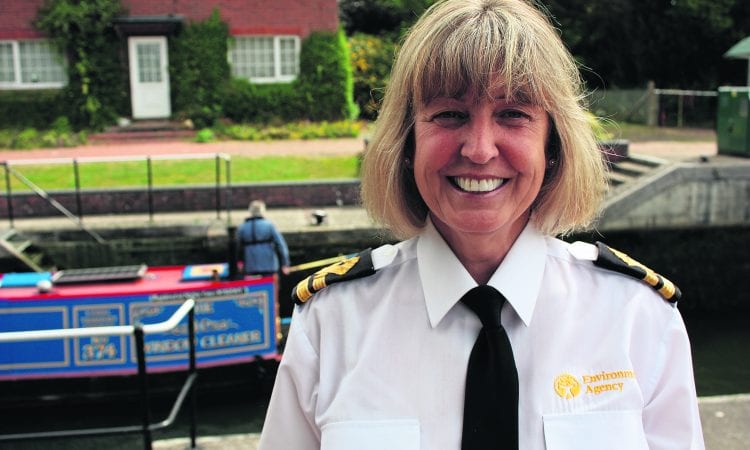 “EVERY day can be different. Whatever I may have expected to have spent my day doing, it is likely to turn out to be completely different,” says Carol Morgan. “That is what makes working on the river so exciting and why I love it.”
The role that Carol finds so fulfilling is as one of the Environment Agency’s waterways operations team leaders.
She is currently covering the stretch from Shiplake Lock near Reading to Boulters Lock in Maidenhead. “But I have worked along this whole length of the River Thames,” she explains. “Prior to working along this stretch I was covering from Cleeve to Old Windsor.”
Carol has worked her way up to her present role during the 14 years since she joined the EA staff in 2003. She spent the first 12 months working as PA to the flood defence manager.
“Then,” she recalls, “I applied to take on a position in 2004 as a team leader managing craft registration and the accommodations’ team (responsible for licensing mooring piles, pontoons etc.) until I joined the Waterways Navigation as a technical officer. It was in 2006 that I became a waterways operations team leader.”

In her team she has 14 permanent staff, mostly lock keepers. To these are added, during the busiest time on the river from May to September, 20 seasonal temporary staff that assist the full-time staff of lock – and weir – keepers across the whole river.
For Carol this involves the advertising for the temporary posts, followed by the various stages of this annual process of recruitment – the sorting through of applications, the interviews and the  final appointments.
“The recruiting of staff is quite a major part of my job,” says Carol. Then with the appointment made, she will also be involved in the training of the recruits.
In many cases this may need to be more in the form of a refresher course, for there are a good number of people who return to the seasonal team year after year.
“I am lucky that we have so many people who provide us with this continuity,” says Carol. “They are absolutely brilliant. There are many people who find that it suits them to do this seasonal work. They may be semi-retired, or have taken early retirement from their previous jobs. They can take off somewhere for the winter if they want to.”
It is this recruitment process that has been occupying much of Carol’s time over many  recent weeks.
Throughout the year there are many other aspects of the role that keep Carol busy during her very varied days.
“My number one priority is always health and safety,” she emphasises, “for both the safety of the team and the safety of the river users.”
One area where safety is her concern is in the management of sporting events, such as the regattas held at venues all along her stretch of the river. Large or small, health and safety management is all-important.
Among the larger events are those such as the Henley Royal Regatta, in late June and early July, and the Henley Festival which follows it.
The appearance of the big-name performers booked for the festival draws large crowds, some of whose number may be aboard boats which they are not as familiar with using as the regular boaters.
An appearance by Lionel Richie brought in such a large gathering, Carol well remembers. “There were so many people there in boats you couldn’t even see the water – there were both big and small craft all gathered together,” she recalls.

Another annual event with which Carol became involved is swan upping, when the long-established traditional rounding-up takes place of all the swans on the river – still officially belonging to the sovereign – so that they can be given their annual check over for any injuries or other causes of concern.
The inspection is carried out by the Queen’s Swan Marker and the scarlet-uniformed Royal Swan Uppers, who also record swan population numbers.
“We make sure that the teams get through the locks and that they have the space they need in which to work,” explains Carol. “They work very efficiently. They round up the swans very quickly and handle them very gently.”
Swans may enter Carol’s working day at other times, if she should receive a report of one with an injury, or having been seen in the dangerous and often life-threatening situation of having become entangled in discarded fishing tackle.
On these and other such occasions involving wildlife, Carol contacts one of the swan rescue organisations or other specialist groups.
There can be reports of livestock in the water, and when one such casualty was a lamb it was one of the lock keepers who came to the rescue, managing to get it out of the water and safely back on dry land.
There are also the often-occurring inanimate objects floating in the water, and are one thing for which Carol keeps an eye open when she goes out on patrol along the river. It may be an uprooted tree for which a contractor needs to be called for its removal, or some other object that could cause a problem for boat traffic.
“My job is to make sure that the navigation is maintained effectively,” says Carol.

Liaising with boaters and ensuring that they travel safely, and working with landowners and other members of the community, provides good opportunities for personal contact with the general public. The lock keepers in Carol’s team also enjoy this contact, answering questions from boaters about how their locks work, and being able to provide local information about the area to visitors passing through.
One has a novel way of integrating with the passing boaters – he gives them a scorecard each time, giving them marks according to how well they carry out the manoeuvre. “The boaters love that,” says Carol.
She praises her team for how well they look after their locks. “Every one of the lock keepers takes pride in their site,” she says. “In the summer they look really beautiful with the flowers in the gardens, in tubs and in hanging baskets. They are much appreciated by the boaters.”
During the winter months there is the necessary refurbishment programme with those locks due for attention closed, this during the quietest time on the river and with the closure advertised months in advance.
Hers is far from being a nine-to-five job. There are early starts and late finishes, with weekend working and coverage needed at all times, including at Christmas and over the new year period.
The team leaders also cover one another’s stretches of river when a team leader is off-duty or on holiday, usually a stretch adjoining their own.
Carol was the only female waterways operations technical officer in 2006 when she took up that role, and now she is the only female among six team leaders. “But they all treat me as an equal,” she says.
Although not a boater herself, Carol does not move far from the waterways in her spare time, for as she lives near the river her walks often taken her in that direction. “I am an outdoors person,” she says. “I enjoy seeing all the wildlife, deer on the banks, the swans and ducks nesting and rearing their young broods. This is a wonderful time to be out there.”
Does she have a favourite lock area to walk by? “They are all lovely,” she says, “and all different.”