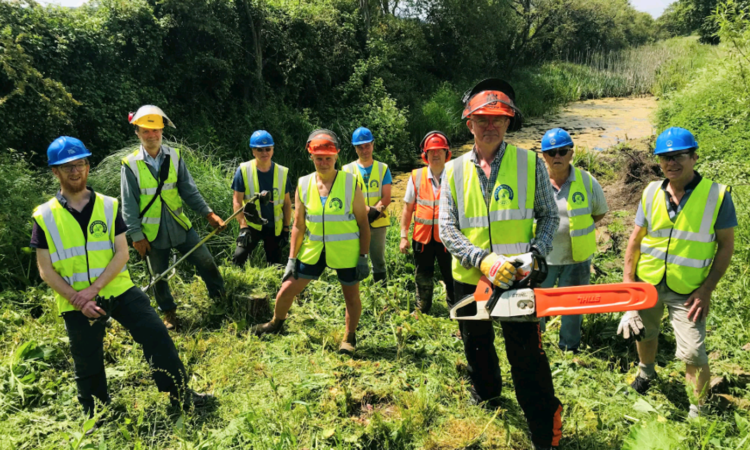 HARDWORKING volunteers are rediscovering a former waterway which has been hidden for more than a century.

The Wilts & Berks Canal Trust is clearing a new section of the abandoned line which once passed between Pewsham and Derry Hill, to the east of Chippenham. The stretch at Green Lane Farm, leased from a local landowner, is more than 760m long and reaches from the A4 to Pudding Brook.

Work parties had to cut their way through dense undergrowth to reveal the route used by narrowboats carrying coal, grain and other cargo in the 1800s. Volunteers have been busy clearing the towpath, removing rubbish, laying hedges and planting trees, and now hope to recruit more people to support their latest project. The charity would like to create a valuable new amenity for the local community, similar to the popular stretch which has already been restored between Pewsham and Lacock to the south.

Melksham, Chippenham & Calne branch chairman Dave Maloney said: “When we first started work on this site it was completely impassable and we had to use chainsaws to clear our way through the hawthorns and brambles.

“There was also a great deal of rubbish which had accumulated over the last hundred years, including rubble, glass and metal, all of which had to be carefully removed.”

The charity would like to create a valuable new amenity for the local community, similar to the popular stretch which has already been restored between Pewsham and Lacock to the south.

Dave continued: “We’re currently improving the towpath and using a habitat management plan to create a new wildlife corridor and then we’ll start removing obstacles from the water before looking at the possibility of dredging.

“Longer-term, we would like to bring it up to the same standard as the Pewsham stretch which is now hugely popular with walkers, runners and cyclists, and clearly demonstrates the benefits and beauty of a restored canal.”

The section at Green Lane Farm was part of the main line and included the Derry Hill wharf. A junction to the south took the canal into Chippenham, while a junction to the north took it into Calne. Visit www.wbct.org.uk

The aim of the Wilts & Berks Canal Trust is to restore the waterway from the Kennet & Avon Canal near Melksham to the Thames & Severn Canal near Cricklade and the River Thames near Abingdon.