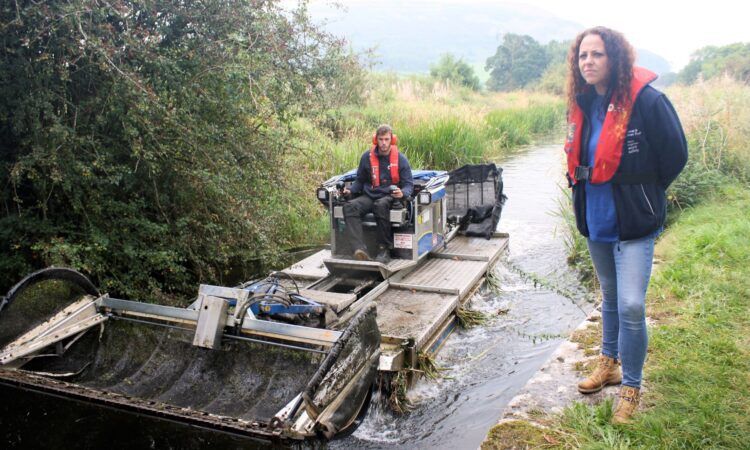 Waterways and wellbeing charity, the Canal & River Trust is waging a major battle to control invasive weeds on the Lancaster Canal.

These fast-growing plants are spread by passing boats, canoeists, paddle boarders, anglers’ nets and walkers’ muddy boots and, left undisturbed, can form a thick green carpet on the water. This can then cause problems for boat engines, and its solid appearance makes it a potential danger for children and animals. Hotspots for the weeds are low flow areas around Lancaster, Garstang, Cabus Nook, north Preston, Radcliffe Wharf and Woodplumpton.

The Canal & River Trust, which cares for 2,000 miles of waterways, has stepped up its response on the Lancaster Canal with a massive vegetation clearance programme, including the use of a Truxor amphibious tractor, which this year has scooped up hundreds of tonnes of problematic and invasive weeds from the waterway.

The water supply for the Lancaster Canal feeds through via the unnavigable Northern Reaches link from Killington Reservoir, near Kendal, and keeping that channel flowing freely is also a constant challenge.

Angela Parkinson Green, local area operations manager for the Canal & River Trust, explained: “Since 1968, the canal has only been navigable from Tewitfield southwards after it was severed in three places by the construction of the M6 motorway. This gives us unique challenges on the Lancaster – including the loss of nearly two thirds of the water supply between Killington and Tewitfield. As well as weed and silt removal, every day our staff have to clear out the three M6 culverts which carry the canal water supply under the motorway.
“Weed carpets form easily in low flow areas further south, so it is a constant battle to keep the water flowing and the vegetation away from the canal. It would be great if we could just turn a tap on – but it is a lot more complicated than that.

“The beautiful Lancaster Canal is home to more than 2,500 boats and about 60 per cent are cruisers or have on-board engines which can be damaged by weeds. Traditional narrowboats cope much better with these conditions.

“We have a plan to dramatically reduce the amount of weed in the canal and we are very grateful to the volunteers who have joined with our staff to keep the canal looking its best. Just over 30 miles of the Lancaster Canal, three quarters of the waterway, has been awarded a coveted Green Flag, the environmental gold standard awarded by Keep Britain Tidy group.

“At Tewitfield, Blossom hire boat company has recently adopted a one and half mile stretch of the canal and is making a big difference for all canal users in that area. And from May next year, canal enthusiasts Kim Parry, Ross Fender and Vicki Hepple will be organising a new volunteer programme inviting everyone who enjoys the waterway to get involved in helping to remove unwanted weeds and reeds.”

If you would like to volunteer for a towpath taskforce or are interested in adoption, please email the Trust’s Lancaster Canal volunteer team leader Anna Barlow on anna.barlow@canalrivertrust.org.uk. For more general information about the Canal & River Trust, including volunteering and donating, visit canalrivertrust.org.uk