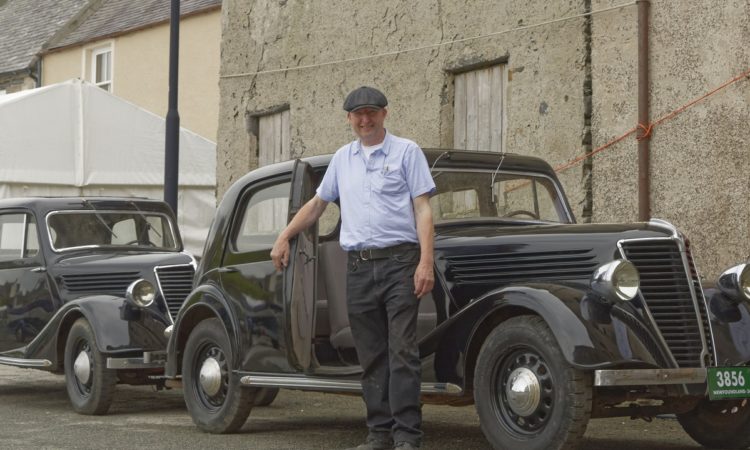 Fans of the cult television show, Peaky Blinders can follow in the footsteps of Birmingham-gang leader, Tommy Shelby at this year’s Scottish Traditional Boat Festival. Two of the original classic 1938 Renault Primaquatre cars will be on display on Saturday 18 and Sunday 19 June 2022 in the historic harbour of Portsoy, where two episodes were filmed.

Stars of the show Cillian Murphy (Tommy Shelby) and Finn Cole (Michael Gray) stayed in Portsoy for five days in early 2021, to shoot the final episodes, with the historic harbour being transformed into the French island of Miquelon in North America, during the 1930s.

Only the best and most expensive cars were good enough for the Shelby family and visitors to the annual celebration of maritime heritage, will have the rare opportunity to see the vehicles used in the dramatic final showdown between Tommy Shelby and his cousin, Michael Gray. The cars will be in position on the harbour, as they were in the explosive scenes where Michael Gray met his fate.

Traditional fishing boats, which were used in series six, will drop anchor for the two-day event. They include Comet, a 16m ex-fishing boat which was re-painted in custom colours – by order of the Peaky Blinders. A traditional salmon coble boat, fishing vessels the St Tod and the Sarah Anne which also appeared in Whisky Galore, will be there too.

Several buildings around the harbour featured in the TV series. These include, warehouses, hotels and the Police Station, locations where visitors can take a ‘Shelby selfie’ posing in the spots where Tommy, the mastermind of the Shelby empire, did his dealings.

David Urquhart, chair of the Scottish Traditional Boat Festival committee says, “It is a real coup to bring the original cars from Peaky Blinders to Portsoy. The show has captivated fans all over the world and we are giving visitors to the festival the unique opportunity to sit inside and see these vintage cars, up close and take a ‘Shelby selfie’. Flat caps are optional.

“The final series of Peaky Blinders attracted an audience of over seven million and for Portsoy to have an association with a production of that magnitude, it really is something for our community to be proud of. We felt that the addition of the ’Peaky’ features this year, would not only bring a new element, but also attract some of the show’s following to Portsoy. People will be able to see the car and boats that Shelby and his associates travelled in and visit the places where memorable final scenes were shot, whilst soaking up the unique atmosphere and entertainment we have at the festival.

“There is a real buzz around this year’s event, the whole community has really missed it over the last two years and the support we have received has been phenomenal. We have made some changes, moving the food fayre to larger premises on the back green and we have added a big screen, where we will showcase what’s going on around the harbour and in the various entertainment marquees we have set up. However, the core of our event remains strongly rooted in our maritime culture, with historic vessels from far and wide, great live music from fantastic local artists, unique handmade products and displays of intricate and traditional crafts. There will also be entertainment and activities for little ones, so there is something on offer for the whole family. We’re looking forward to welcoming people back, harbourside, this year.”

Nick Goding, producer of Peaky Blinders series six says, “We’re thrilled to hear that Portsoy is able to hold the boat festival once again and wish everyone involved the best of luck in opening the town to visitors from all over the world.

“The Peaky Blinders team was so grateful to Scotland, and in particular Portsoy, for embracing our shoot at such a difficult and threatening time. Without the support and enthusiasm given to us in February last year, the world would not have another series of ‘Peaky’ on their televisions this year. We were made to feel so welcome in the towns and surrounding areas and we are delighted that you have secured the vehicles that were used in the staging of the series elements that Portsoy offered. We wish you every success with the boat festival this weekend.”

Paul Bush OBE, VisitScotland’s Director of Events, says, “EventScotland is delighted to be supporting the Scottish Traditional Boat Festival in 2022. Scotland is one of the best places to experience events, particularly when they when are held in places that also tap into our international reputation as a stunning filming location for television and cinema.

“After the last two years, the festival provides the perfect opportunity for the community to come together and enjoy all the event has to offer whilst set against the picture-perfect backdrop of historic Portsoy harbour, as immortalised in the iconic Peaky Blinders.”

The 29th annual Scottish Traditional Boat Festival will celebrate maritime heritage with a range of delights for all the senses from boats, music and crafts to food for all the family. It is expected to attract around 16,000 visitors over the two days and will see the finest craft in the Scottish historic fishing fleet drop anchor in Portsoy, including the Isabella Fortuna. One of the oldest boats taking part in the event, the 19th century Fifie is a traditional fishing vessel owned and restored by the Wick Heritage Society and will journey down from Caithness especially for the festival.

A wide range of traditional craft demonstrations including knitting, crocheting and ceramic painting will all be showcased at this year’s event. The best of Scottish produce is on the menu in the food fayre, with locally caught fish and shellfish taking centre stage alongside Aberdeen Angus beef, wild Scottish venison, handmade cheese, chutneys and jams and locally produced gin, whisky and rum.