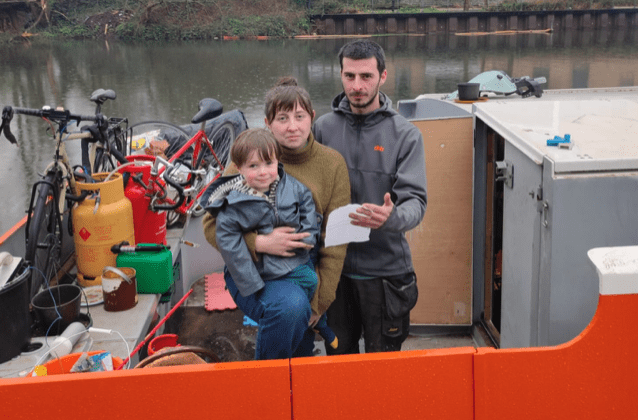 On Saturday 26 March 2022, boaters from around the country will march on Canal & River Trust’s (CRT) main London office to protest the Trust’s continued attack on the capital’s liveaboard boating community. Starting in Regents Park, the protest will march to CRT’s offices in Little Venice where there will speeches and entertainment, plus the opportunity for the public to speak to boaters and find out how these discriminatory policy changes are threatening people’s livelihoods.

Since London’s boaters forced CRT into a consultation on their plan to remove up to 550 mooring places on the River Lea in 2021, the Trust has doubled down on their plans to cull boats from London’s waterways including:
bringing in more reduced mooring times on the Grand Union; implementing banning boats from 295 ‘no mooring’ spaces in ‘safety zones’ despite indicating they wouldn’t; turning a blind eye to criminal damage of safety features of the River Lea inside a so-called ‘safety zone’; proposing 1.1km of new chargeable moorings and further mooring restrictions in Central London; revealing that the Trust no longer takes complaints about their policies.

The National Bargee Travellers Association (NBTA) believe this is further evidence of CRT’s plans to prioritise leisure over living on Britain’s waterways.

Early in 2021, CRT announced that they would be restricting moorings along 10km of the river Lea, claiming that mooring in these ‘Water Safety Zones’ was unsafe. The NBTA, together with the London boating community, fought back by organising two flotillas involving over 70 boats and 1000+ people. CRT was forced to engage boaters in consultation, the result of which showed boaters are concerned about safety, but the ‘Water Safety Zones’ would not make the river safer. The ‘River Lea Forum’ was established with representatives from all interested user groups to discuss what would make the waterways safer. However, CRT ignored boaters’ voices by imposing many of the ‘Safety Zones’ before the first Forum even took place.

In October 2021, ‘no mooring’ signs started appearing on the River Lea and boaters moored in these areas were told they would have enforcement action taken against them under the new ‘Improper Mooring Process’. CRT claims that these sites come under its existing rules on where boats are permitted to moor, but these are the exact same stretches that they’d planned to designate as no mooring as part of their ‘Water Safety Zones’, making these new rules for areas where boaters have lawfully moored without any penalty for many years.

On 10 January 2022, enforcement started on the ‘no mooring’ sites and since then, CRT has continued to try and intimidate boaters by giving notices threatening to terminate licences and thereby forcing boaters out of their homes. CRT has also employed a third party car parking ‘enforcement’ agency at huge cost to hand out these notices.

Amelia and Tyrone have lived on a boat travelling the London waterways for seven years. Together with their two-year-old son, they spend up to 6 months a year staying in one place to the next along the stretch of the River Lea from Tottenham to Stratford where the ‘no mooring’ signs have gone up. They are currently expecting their second child and worry that they may have to leave the water, and perhaps London, altogether.

“This area is our home. My son attends a nursery here and we’re registered with doctors, dentists, and my midwife appointments are in Homerton Hospital. We have built a life within this area and not being able to moor here truly feels as if we are being forced out,” Amelia says. “The stress of receiving abrupt emails, notices and knocks at the door, about where we are moored, in areas we have allowed to be for years previous, is causing us a great deal of stress at a time when, as a young and growing family, we already have a lot going on. No consideration is being given for people who have set up their lives, careers and families in these areas.”

Days before Christmas 2021, CRT made a fresh attempt at trying to take away mooring spaces in the capital by sneaking out another consultation with proposals for paid-for bookable short term moorings of less than 14 days. This, despite their own figures showing that the two ‘test sites’ for these new chargeable moorings have had less than 25% occupancy – most of the year they were wasted moorings. They’re also proposing further areas of restrictions on triple mooring and narrowboat to widebeam mooring – regardless of how wide the navigation is.

“This continued disregard for the people who live and work in these new ‘no mooring’ and proposed paid-for mooring areas drives boaters away from their livelihoods, and out of their homes,” argues Ian McDowell, chair of the London branch of NBTA. “By ignoring its responsibility to preserve the waterways for all communities, CRT is crossing a dangerous line that could see London Waterways and other waterways become usable only by those who can afford any extra costs CRT chooses to introduce in addition to the licence fee. Their actions only serve to show that while CRT markets themselves as a charity that promotes wellbeing, they repeatedly try to introduce policies which attack boaters’ wellbeing and way of life.”

NBTA London demands that CRT concentrates on its mandate to maintain the navigation with things like dredging, rather than persecuting boaters who moor on some of the widest waterways in the country. The Trust must stop destroying boating communities by favouring one kind of boater over another.

NBTA and London Boaters have fought and prevented unfair and destructive attempts like these before, and we will do so again. National Bargee Travellers Association London branch (NBTAL) is supporting boaters in their direct action to disobey the ‘no mooring’ signs through providing a template complaint letter if they do receive a notice and posters to display in windows declaring the boat is moored in protest.

Hundreds of boaters have defied CRT’s unfair and unjustified restrictions so far and since we are unable to complain online, now we are marching on CRT’s offices to resist the displacement of boaters and to protect our homes. 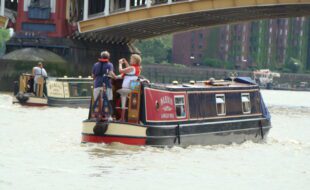