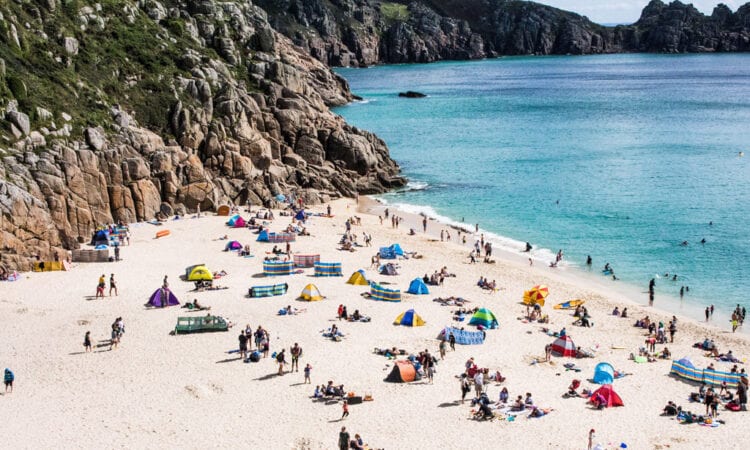 New research released by Aquavista has revealed which counties have the most access to blue space.

The study found that the residents of Cornwall have more access to blue space per km2 than any other county in England. However, most surprisingly, it was the West Midlands that ranked second, despite being completely landlocked with Tyne and Wear in third place.

Searches for terms such as “beaches near me” and “lakes near me” have increased by 82% and 124% respectively, year on year. Whilst searches for “rivers near me” have seen an increase of 175%, showing that now more than ever, people are seeking out blue spaces whether that be on the coast or inland. Perhaps as an antidote to the stresses faced over the past year.

Home to a total of 12 beautiful and unique lakes and 141 beaches, it’s no surprise that Cornwall came out on top.

From fishing villages like Port Isaac and holiday resorts such as St Ives, to Cornwall’s Bude Canal, renowned for being one of the most unusual canals designed in the UK due to its use of six inclined planes, the county of Cornwall has a varied and interesting blue landscape.

Most surprisingly, the study revealed that the residents of the landlocked county of the West Midlands have the second most access to blue space in England.

Despite having no direct coastal access, the county is home to a total of nine lakes and 26 canals, so scores highly for access to inland waterways.

Its largest city, Birmingham, has one of the most intricate canal networks in the world and was once the pride of Victorian Birmingham.

The Birmingham Canal Network started construction in 1768 and at its height, had more than 170 miles of canals, transporting coal, iron and other heavy goods from Birmingham and the Black Country to other cities and towns.

Today, there are still over 100 miles of navigable waterways in the network, 35 miles of which are located within the city, famously making Birmingham home to a larger canal system than Venice.

Lined with a series of modern restaurants, cafes and bars whilst still retaining its beautiful Victorian architecture, the Birmingham Canals are one of the top tourist destinations in the West Midlands and makes it the ideal location to spend some quality time amongst blue space.

When looking at Scotland, a country home to well over 1,000 lochs, the research revealed that East Lothian was the county with the most access to blue space.

Edinburgh featured second on the list, located right on the coastline and with the city of Edinburgh’s sights and landmarks lining the banks of the River Tyne, it’s the perfect location to enjoy time by the water.

Whilst both East Lothian and Edinburgh boast impressive beaches, it’s third place Glasgow that is the most interesting, placing highly on the list without even having a beach.

Set around the River Clyde, and with Seven Locks Wetland Park right on the doorstep, Glasgow and its surrounding area is home to a number of expansive and beautiful lochs and is placed right at the heart of the Forth & Clyde Canal.

Glasgow’s canal has been recently renovated into a vibrant corridor that boasts historic buildings, world-leading design agencies and even an urban watersports centre.

Despite the Highlands containing a whopping 652 different lochs, including the world-famous Loch Ness, the sheer size of the area it’s situated in means that the county only comes in at number 10 on the list.

With 27 beaches, six lakes and one canal spanning 378 km2, the county of Swansea was found to be the number one county in Wales for access to blue space. This was followed closely by the Isle of Anglesey and Bridgend.

One of Swansea’s jewels is Oxwich Bay. A 4km expanse of coastline, the area is extremely popular for diving, sailing, and windsurfing and was once crowned the best beach in Britain by Travel Magazine.

Oxwich bay is not the only award-winning blue space in Swansea, with the county also home to the Swansea Canal.

Built between 1794 and 1798 the canal originally ran for 16.5 miles, yet today, just five miles are navigable and although short, the waterway packs in some beautiful surroundings.

At the impressive Lower Clydach Aqueduct, you can see a grand meeting of the waters, where the canal joins with the Lower Clydach River and the River Tawe, making it the perfect spot to make the most of the beautiful water vistas that Swansea has to offer.

With only six counties to investigate in Northern Ireland, the research unveiled some surprising findings when it came to which areas in the country have the most access to blue spaces.

Spanning 2466 km2 and containing three lakes, two canals and 14 beaches, County Down was found to be the region with the most access to blue space.

The benefits of blue space

It has been proven that spending time near blue spaces offers a host of physical and psychological benefits.

Psychologist Dr Eldad Farhy, states: “Living within easy reach of a water source and spending time there is significantly and positively associated with life satisfaction and positive mental health”.

Despite this, it is only within the past few years that the positive effects of being around water have truly come to the fore.

Dr Farhy notes that it’s only very recently that there has been a genuine scientific interest in the mental and physical benefits of being near blue spaces, with far more time spent researching the effects of green spaces, over their blue counterparts.

With the research shining a light on the areas of the UK which have the most access to blue spaces, Aquavista hopes to encourage more people to experience the benefits of being near the water. Particularly at a time where mental health has never been more important.

Steve de Polo, CEO of Aquavista says: “The blue spaces of the UK offer some of the most tranquil and beautiful vistas that the nation has to offer.

“Having regular access to blue spaces and the outdoors is proven to improve both mental and physical wellbeing, and whilst most of us are familiar with the benefits of being around ‘green spaces’, we want to raise awareness of the multitude of benefits that being near the water can bring.

“Aquavista is all about celebrating the very best of waterside life, and whether you live near a beach, lake or canal, we want to help everyone discover the beauty and simplicity of the waterside”.

For more information and for the full index which breaks down each counties access to blue spaces, please visit: www.aquavista.com/news-views/aquavista-news/blue-spaces