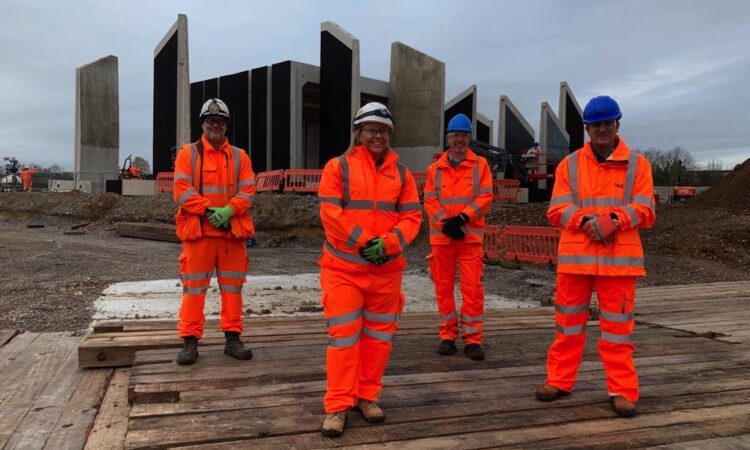 Network Rail will be working over Christmas and New Year to deliver a vital part of this canal project.

While most of us will be enjoying our Christmas dinner and festive films on TV, the team will be working round-the-clock to replace a railway bridge over the canal in Stonehouse.

The current bridge has a narrow opening too small to allow boats to pass under, so the work is a vital part of the project to link the Stroudwater Navigation Canal to the national waterway network, which, when complete will make Stonehouse and Stroud canal towns once again.

The impressive sections of the new bridge, which are of different sizes up to a maximum weight of 64 tonne – have been cast on site and have become a popular sight among canal users. They will be lifted into place by crane during a seven-day closure of the railway.

Deborah Elliott, Project Manager Network Rail said: “We are now close to installation of the new railway bridge over the canal at the Ocean, Stonehouse. Network Rail will be working around the clock from 10pm on Friday 24 December to 4am on Saturday 1st January on behalf of the Cotswold Canals Connected Partnership.
“Because of the complexity of the project and the narrow time frame, the work will be carried out around the clock by a skilled team of 150 people each day working on three shifts per day.

To enable the work to be safely completed, approximately 230 metre length of the canal has been drained to allow for the works and the towpath is closed until March 2022. A system of pumps and pipes will keep the water moving until the canal is slowly refilled early next year.”

Before the canal was emptied, thousands of fish were captured and released into the canal away from the work site. An environmental specialist has been keeping a watchful eye on the wildlife close to the site, including the local swan families.

Chris Mitford-Slade, Canal Project Director for Stroud District Council said: “We are very grateful to the local community for their continued support for this project and we know canal enthusiasts are as excited as we are to see the new bridge going in. However, given the ongoing pandemic and very limited space, we would ask people not to try to spectate near the worksite. We’ll be posting pictures and updates on our social media channels over Christmas and sharing time-lapse footage once the work is complete.”

Alina Wolfe-Murray, project sponsor for Network Rail, said: “We are very pleased to be replacing the railway bridge on behalf of Cotswold Canals Connected. Due to the nature of the project and the machinery we use, some of the work will be noisy and we sincerely apologise for any disruption we cause. We would like to thank our lineside neighbours for their patience, particularly at this time of the year.”

Please check before you travel at https://www.gwr.com/christmas.

In the new year the Cotswold Canals Connected partners will be holding information events in different Canalside locations, between Brimscombe and Frampton to share next steps including the ‘Missing Mile’ planning process and the wider restoration efforts, these will help to keep communities engaged and to answer questions about the project .