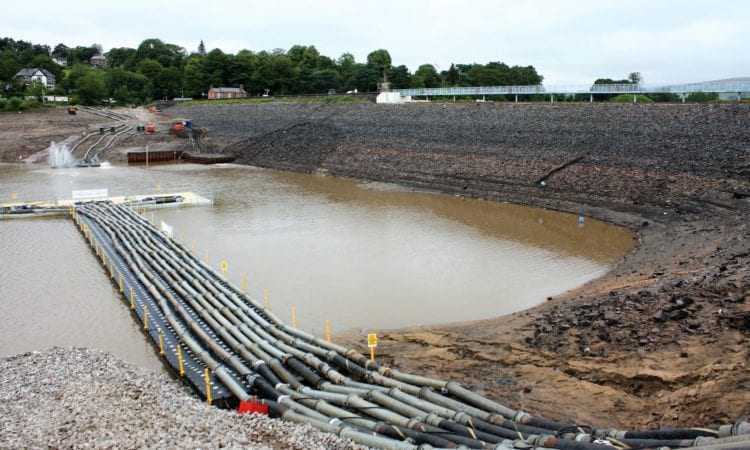 THE Canal & River Trust will today (Monday, January 6) begin the first steps in the restoration of Toddbrook Reservoir with the start of a project to enhance the resilience of the dam wall and spillway following damage to the latter back in August after heavy rainfall.

The works to the dam will be followed later in 2020 by improvements to the Todd Brook inlet channel at the head of the reservoir.  This will provide greater control over how much water flows from the brook into the reservoir or around the reservoir via a bypass channel. This project will take the opportunity to include the installation of a new footbridge across the brook to create a safe route for people wishing to walk from one side of the valley to the other.

The trust is working closely with contractors Kier to keep the reservoir drained as preparations are made for its long-term repair – a process that is likely to take several years and cost around £10 million.

Works to the dam wall and auxiliary spillway

Starting on Monday January 6, temporary works will be carried out on the dam’s auxiliary spillway, which was damaged back in the summer. A protective, waterproof nib (short wall) will be inserted all along the spillway crest which will reach down into the dam’s clay core.

The spillway crest will be increased in height by just over one metre at either end and sturdy concrete waterproof barriers will be installed on the spillway slope to channel any overflowing water into the central undamaged section – which will be lined for extra protection.

The new features will ensure that the dam is secure in any extreme weather events.  They will remain in place until permanent reconstruction of the dam is undertaken.

After the emergency in August, the masonry weir at the inlet channel was raised with the installation of mesh baskets filled with sandbags. In the year ahead, these will be replaced by a footbridge incorporating sluice gates, to provide a higher degree of control over water flows.

The Trust will continue to monitor the bypass channel closely, with expert hydrologists having carried out extensive modelling to assess the topography and the maximum capacity at all points along its course. During normal weather conditions, while the reservoir remains drained, all flow is sent down the bypass channel i.e. none into the reservoir.

The Trust has commissioned an independent inquiry into what caused the damage to the dam’s auxiliary spillway. It is also assisting with an independent review commissioned by government. Both these reports are due to be published early in 2020 and will guide the long-term repair of the dam.

Simon Bamford, asset improvement director for the Canal & River Trust, explains: “We are keen to hear the findings of the independent inquiries so we can move forward and decide how best to fix the dam for the long term. Once we know what caused the damage to the dam we will be able to work out a detailed plan for repairing it, including a precise timetable and costings.  In the meantime, we will be doing some work to protect the reservoir and further improve its resilience against any extreme weather events.

“At the head of the reservoir, we know a footbridge has been on the wish list of some local residents, so we are delighted we can incorporate this into the design for improving the inlet.”