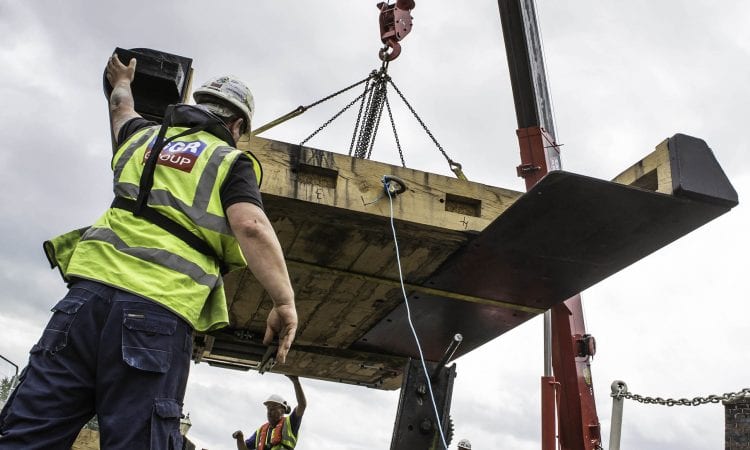 THE Canal & River Trust is carrying out a £43.6 million programme of repairs on waterways across England & Wales this winter.  Ahead of Christmas, the charity is providing an update on the first six weeks of works and what’s coming up in the new year.

Of the 118 hand-crafted lock gate leaves due to be replaced, over 100 have been made and about half are now on site either having been fitted or about to be put in place.  The Trust’s teams have completed 14 of the published winter improvement works with another 36 due to be finished by the Christmas break.  A further 92 repair and refurbishment projects will be completed in the new year.

In terms of major projects that the Trust is carrying out, work has been completed to replace gate cylinders on the Tees Barrage.  On the Lancaster Canal, the Lune Embankment is being relined, while on the Macclesfield Canal similar work is being carried out at Palmerston Street Embankment.  At Hurleston on the Llangollen Canal, where movement in the lock walls has restricted passage through the lock, the Trust is carrying out work to rebuild the affected wall, halt movement, and increase the width of the lock chamber.  Work is ongoing at Winterburn Reservoir, and at Blackbrook Junction Bridge in the West Midlands.

In the New Year the charity has scheduled a programme of works that includes repairs to mechanical swing and lift bridges, embankment relining, and culvert repairs, amongst others.  Two pumping stations are also on the list for special attention.  Bowyer Street Pumping Station, a key water supply to the Grand Union Canal, will see works to upgrade and replace life-expired pumps.  On the Wendover Arm, a similar project at Tringford Pumping Station will replace the pumps, pipes, electrics, and gantry.

Dredging has been completed on the Macclesfield Canal and on the Worcester & Birmingham Canal, where the Trust has removed 27,000 tons of contaminated sediment at Titford Pools.  Further dredging, bank protection and tree works are planned in the new year.  On the Monmouthshire & Brecon Canal at Pontymoile, 4km of dredging has been completed, with a further 2.2km planned in the New Year.

Spot dredging on the Llangollen Canal is ongoing with around 1700 cubic metres of silt removed from the 2km length between Frankton Junction and New Marton Locks, with some dredgings reused to repair offside erosion.  The work will continue into the new year, along with reactive spot dredging across the country and projects at Sharpness Dock, Ribble Link, Liverpool Dock approaches, and on the Upper & Lower Peak Forest and Chesterfield canals.

The Trust is also offering people the chance to see ‘behind the scenes’ at a number of sites.  The open days will give visitors access into drained lock chambers on the Grand Union Canal and Trent & Mersey Canal, whilst repairs to the ‘Cathedral of the Canals’ – Anderton Boat Lift provides an amazing opportunity to get a rarely-seen view of this ‘wonder of the waterways’.  A number of the events, including on the Gloucester & Sharpness Canal, will highlight the Trust’s #plasticschallenge which invites people to get involved in helping to stop the flow of plastic litter into the world’s oceans.  Find out more about the open days here:  https://canalrivertrust.org.uk/enjoy-the-waterways/events/open-days

Richard Parry, chief executive of the Canal & River Trust, comments: “Research tells us that time spent by the water can help us all to feel happier and healthier, so this programme of works is about far more than bricks and mortar.  By investing over the winter months we’ll not only be protecting the historic fabric of the region’s waterways and making sure that they’re working well for boaters, but we’ll also be ensuring that local communities have safe, open waterways to enjoy.

“Many people may not realise the work and attention that our charity and our volunteers put into caring for the waterways or indeed how getting involved, simply by visiting their local canal, can improve their health and wellbeing.  Our winter open days are a chance for people to come along and find out more, and we look forward to seeing lots of new faces as well as many old friends at the events.”

For more information about the Canal & River Trust, including how to volunteer and donate, or to see further details about the open days, visit:  www.canalrivertrust.org.uk/enjoy-the-waterways/events/open-days