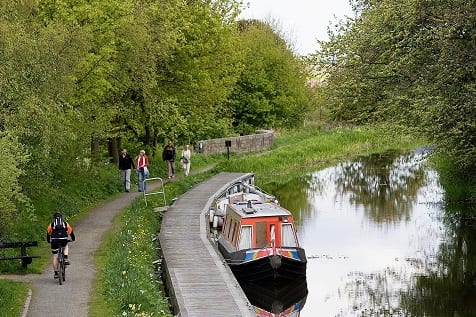 THE Union Canal at Linlithgow has fully reopened to public access following the completion of engineering work to reinforce its embankments.

The £1 million vital improvement works, which began in November 2018, involved closing the section of the canal to navigation and pedestrians to allow Scottish Canals to strengthen the embankment.

Part of a Scotland-wide programme of winter maintenance, the Scottish Government-funded Linlithgow embankment works were carried out in two phases. Phase one comprised 160m of sheet piling installed along the canal, 4.5m deep, between Linlithgow Academy and Woodcockdale. Dam structures were operational at both Bridge 45 and Bridge 48 to enable a partial dewatering of the canal.

Phase two involved further sheet piling along the canal at Manse Road East. The result is a strengthened embankment with an improved towpath, four residential and four additional leisure/visitor moorings. The essential works are part of Scottish Canals’ commitment to improving the 200-year-old canal network to offer greater public value.

Richard Millar, Director of Infrastructure at Scottish Canals said: “The 200-year-old Union Canal attracts more than 10 million visits each year and plays an important role in the communities on its banks. Thanks to funding from the Scottish Government, this vital maintenance project has safeguarded the future of the waterway at Linlithgow, ensuring this incredible heritage structure continues to deliver benefits for local people and Scotland as a whole into the next century and beyond.

“I am delighted that our engineers were able to deliver this vital project, with our teams working round the clock throughout the winter months to complete the upgrade ahead of schedule and within budget. We look forward to welcoming the public to explore the canal at Linlithgow by boat, boot and bike this summer.”

The improvement works were scheduled following embankment surveys carried out by Scottish Canals in 2017. This saw the water level of the waterway reduced over a five-kilometre stretch, and around 30,000 cubic metres of water drained from the canal.

As a result of the surveys, the embankment works were identified as a priority for Scottish Canals, under their Asset Management Strategy. This strategy defines where Scottish Canals’ limited resources will be directed, prioritising works that ensure the safety of the public and bring the widest possible benefits for all the people of Scotland.

Cabinet Secretary for Transport, Infrastructure and Connectivity, Michael Matheson, said: “It’s welcome news that this section of the Union Canal at Linlithgow has reopened to boaters and pedestrians following the completion of these critical works. As part of Scottish Canals’ overarching asset management strategy, these additional works will help secure the future of the Union Canal.

“Our canal network plays a vital role in tourism and economic regeneration. To further secure the future of our historic network, we have increased Scottish Canals funding to record levels in the Scottish Budget for 2019/20, which recognises the challenges our partners face in maintaining our historic waterways.”