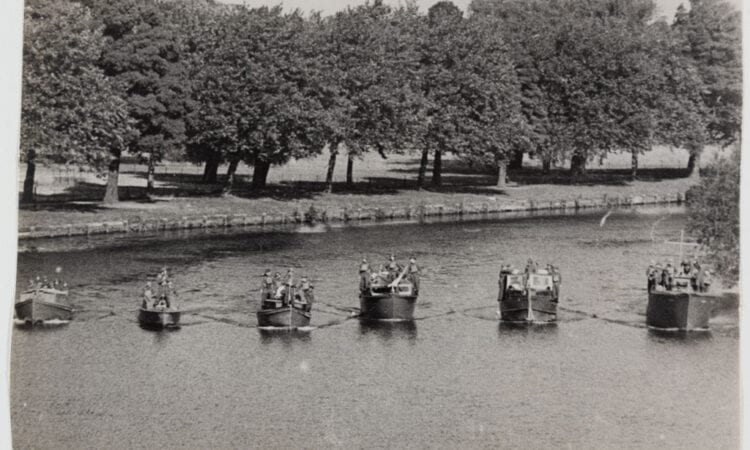 A 1920s tragedy, the orders for the River Purification Service and the story of the Thames’s very own Dad’s Army are some of the things revealed in a new online exhibition created by the Berkshire Record Office.

The exhibition, ‘Where Smooth Waters Glide’, is drawn from the archives of the and its predecessor, the Thames Navigation Commission.

It was these bodies that built the river outside London that we know today – the pound locks, weirs and towpaths – and were responsible for keeping the river safe and clean.

The first meeting of the reformed Thames Navigation Commission took place in the Town Hall, Henley-on-Thames, on 9 May 1771. Its job was to turn the Thames into the Georgian HS2 – a free-flowing trade route for transport between London and Oxford.

It did so by removing obstructions and building the pound locks and weirs – a massive investment in public infrastructure that shaved half a day’s travel for every lock built and reduced the risk of damaged barges. Barge owners paid tolls to the Commission to use the locks.

The Thames’ trading heyday was short-lived, as the railways soon came to offer quicker delivery, but the Commission survived, redesignated as the Thames Conservancy and tasked not only with maintaining the locks but with keeping the river safe and clean.

The river could be a dangerous place. In June 1924, Oliver and Martha Bull came on a day trip to Cookham and hired a canoe, but they were swept towards Cookham lock.

Oliver, gripping tight to Odney Weir, was rescued by the lock-keeper – one of the many Conservancy staff trained in life-saving. Martha was not so lucky, and her body was retrieved at Maidenhead a week later.

Conservancy staff were also tasked with stopping pollution. This first became an issue during the Victorian period, as flushing toilets and basic sewerage systems drained untreated waste into the Thames.

This was made illegal after 1866 and the Conservancy prosecuted water companies, businesses and farmers who dumped anything poisonous into the water.

By the 1930s the River Purification Service inspectors were on duty 24/7 with powers to enter premises or board any vessel. One of their jobs was removing dead animals that had been thrown into the river.

Though the Thames in London was famously declared to be ‘biologically dead’ in 1957, this was never the case for the river run by the Conservancy. Fish and wildlife were abundant and open swimming was routine.

In the Second World War, many of the lock-keepers joined the Forces and the locks were maintained by their wives or retired staff.

The river was protected by the Upper Thames Patrol – hundreds of armed volunteers who guarded the locks and bridges and cruised the river in private launches. The UTP was part of the Home Guard and its happy lack of action during the War led to its affectionate acronym as ‘Up The Pub’.

Today, the Thames Conservancy functions have passed to the Environment Agency and Thames Water.

Mark Stevens, County Archivist for Berkshire, said: “The Thames is much-loved and very special. It also has a fascinating history, and it’s quite humbling to see how much effort has gone and still goes into caring for the river.

“The Thames Conservancy archive is living proof of this effort – totalling tens of thousands of pages, plans and other documents. We’re delighted to present just a few of them to tell the river’s story.”

Thames Water archaeologist Dr Victoria Reeve said: “Thames Water and its predecessors have been helping look after the River Thames, and the life it supports, for over 400 years.

“As one of its modern-day custodians, whose job is always ongoing, we are delighted to see its fascinating history on display for the public to enjoy.

“The River Thames faces new challenges today. There is much we can learn by understanding yesterday’s challenges in the way we currently protect the river for the enjoyment of future generations.”

The 250th anniversary of the Thames Conservancy archive is just one of a number of significant celebrations during 2021, including Reading’s Abbey Ruins celebrating its 900th anniversary in June.

Where Smooth Waters Glide can be found online at www.thames250exhibition.com.