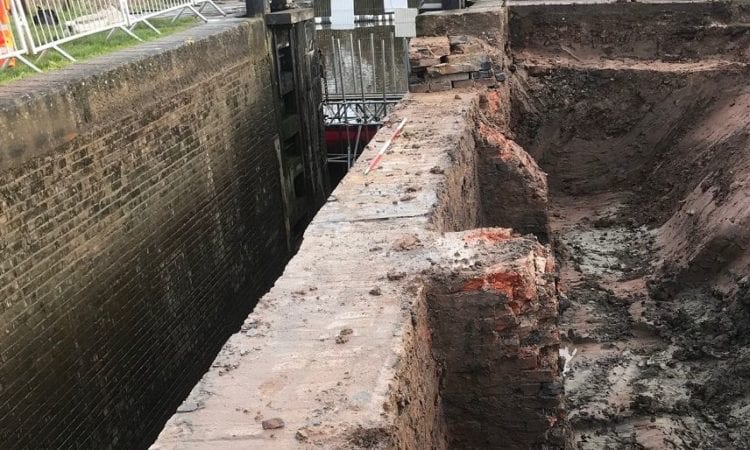 THE Canal & River Trust is undertaking major repairs to Lock 4 on the historic Hurleston Lock Flight on the Llangollen Canal in Cheshire.

The walls of the 223-year-old Grade II Listed lock have gradually shifted over time making it increasingly difficult for narrowboats to pass through.   Instead of being long and straight to accommodate traditional canal boats, the lock has slowly bowed due to movement in the ground around it.

Work to repair and straighten the lock is costing over £1 million and has involved an archaeological survey before the lock wall on the towpath side was carefully dismantled as part of the painstaking repairs.

A new hidden concrete retaining wall will help stabilise the ground and prevent any further movement before a mixture of original stonework and new brickwork is put back in place.  The work is expected to be completed by March 2020.

Rob Jowitt, project manager from the Canal & River Trust, said: “The Llangollen Canal is one of Britain’s most iconic waterways.  It’s hugely popular, used by thousands of boaters, walkers, cyclists and runners each year and a great place to get away from it all.

“Hurleston Locks is a really busy point on the canal system as it connects the Llangollen Canal and the Shropshire Union Canal so the work we’re doing to repair the lock wall is really important as it will allow historic boats back using this beautiful waterway once again.”