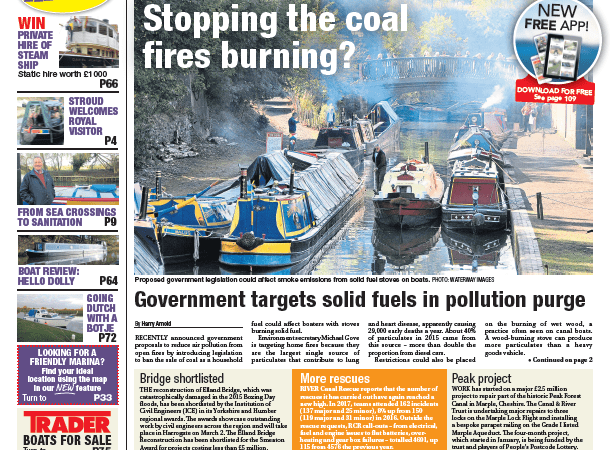 If the weather forecasts are to be believed, we’re heading into the coldest spell of the winter – so the cover story of the March issue of Towpath Talk will be a hot topic of conversation for some.
The government wants to reduce air pollution caused by open fires by introducing legislation to ban the sale of coal as a household fuel, a move which could affect boaters with stoves that burn solid fuel. 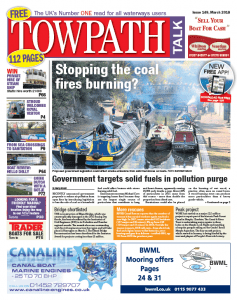 That issue aside, the March newspaper is full of talking points. Invasive Species Week (March 23-29) will be aiming to encourage users of the waterways to stop the spread of invasive non-native species, a major threat to biodiversity. Find out how you can help!
As usual there are plenty of features to capture your interest, with Les Heath tracking down a couple who have friends over the airwaves as well as on water – radio hams Sandra and Dave Morley.
Janet Richardson visits an Irish museum where everyday items are reminders of yesteryear, while Stuart Chapman checks out a little railway that serves a Manchester boatyard.
Cracker the boat horse is still getting up to mischief in the close season… soon he’ll be too busy pulling Countess to end up in bother!
Harry Arnold’s Cutnotes recollections take a look at the eccentric world of scientist and inventor Professor Heinz Wolff and Helen Gazeley completes a free online water safety course which is open to everyone and could save lives.
Alison Alderton takes a look at the history of Ireland’s water bridges – the many and varied aqueducts that bedeck the landscape – and no issue of Towpath Talk is complete without the regular input of keen angler David Kent and the latest extract from the book Britain’s Canals, A National Treasure in 100 Must-See Objects by Phillippa Greenwood and Martine O’Callaghan. In the latest segment the duo go on an interplanetary journey of sorts as they look at the history of the Shroppie fly-boat Saturn.
Don’t forget you can keep up to date with the latest news from your favourite waterways publication on smartphone and tablet as the latest issue is available via a FREE app now! The links for each mobile device are as follows: