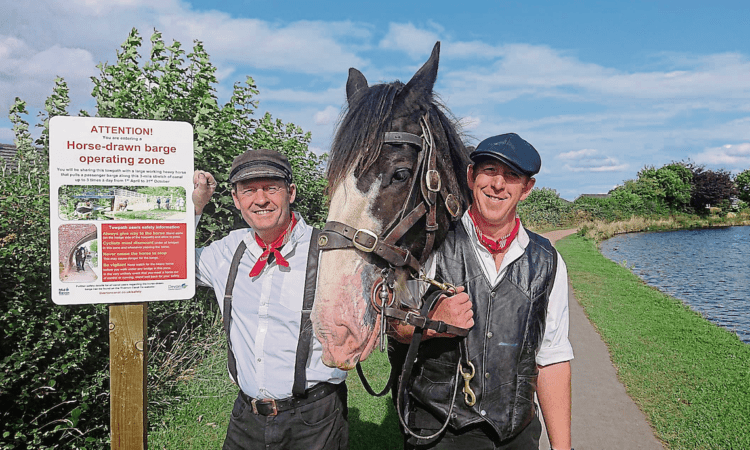 PIONEERING new safety initiatives have been introduced at the Grand Western Canal Country Park in a bid to make the towpath safer.

A three-mile-long ‘Horse-drawn Barge Operating Zone’ is now indicated by new signs at either end, with smaller versions of the sign located at access points between.

These A2-sized signs have been developed in response to several near-misses under some of the bridges in recent years, when towpath users have acted dangerously around the horse that pulls the barge. The signs highlight the safe behaviour requested of towpath users in this zone, as well as some of the potential hazards.

Philip Brind, proprietor of the Tiverton Canal Co, said: “Our review found that the towpath is now busier than ever before, but many of the canal visitors either don’t know about the horse-drawn barge, or are unaware of the area where it operates.

“More importantly, they’re not aware of the potential dangers that the horse-drawn barge operation could pose to themselves as canal users, whether on foot, fishing or as a cyclist.

“Our thanks go to canal manager Mark Baker and his team, and Devon County Council, for their understanding and support in creating this Horse-drawn Barge Operating Zone, which is the first of its kind in the country.”

Coun Roger Croad, Devon County Council cabinet member with responsibility for environment, said: “We all welcome the fact that the use of the canal is continuing to increase, but we don’t want it to become a victim of its own success.

“We want everyone to be safe when using the towpath and that needs all users to be considerate to each other.

“Canal Rangers are reporting that public feedback to the signs has so far been very positive. Hopefully these new signs will help people recognise the potential dangers of the heavy horses on the towpath in the Horse-drawn Barge Operating Zone. This will make things a great deal safer for all canal users, particularly when passing under the bridges.”

New signs have also been developed to encourage more considerate behaviour among cyclists, after members of the Canal’s Joint Advisory Committee (JAC) expressed concern at the number of reported incidents involving cyclists under bridges.

It was found that a large proportion of cyclists do not dismount and walk under the canal’s bridges, and with no legal or physical restriction requiring them to do so, the JAC agreed to focus on explaining the dangers to cyclists in the hope they will slow down, give way and take extra care.

An update to the policy relating to cyclists at bridges means that instead of being requested to dismount and walk at 19 of the canal’s bridges, the instruction to dismount is now only made at five bridges in the Horse-drawn Barge Operating Zone and the two bridges on either side of Sampford Peverell. The horse that pulls the barge features on most of the signs in the zone and these signs have red and orange backgrounds.

All the other signs portray a number of volunteers that represent a range of more vulnerable towpath users, including a mobility buggy user, a dog walker, and parents with pushchairs. These signs have blue/green backgrounds and give messages to slow down, take care, and give way.

Coun Colin Slade, county councillor for Tiverton East, said: “The signs are photo-based so that even if towpath users don’t read the text, a glance at the photos should get across the idea that they can meet someone or something head-on under the bridges.

“The range of users featured in consecutive signs should reinforce the vulnerability of towpath users that cyclists could scare or injure if they don’t slow down and take extra care.”

Coun Ray Radford, county councillor for Willand and Uffculme, said: “Each of the individual signs includes the bridge where the sign is located, which makes it more pertinent and meaningful. By being more engaging, hopefully users will be more inclined to take on board the messages.”