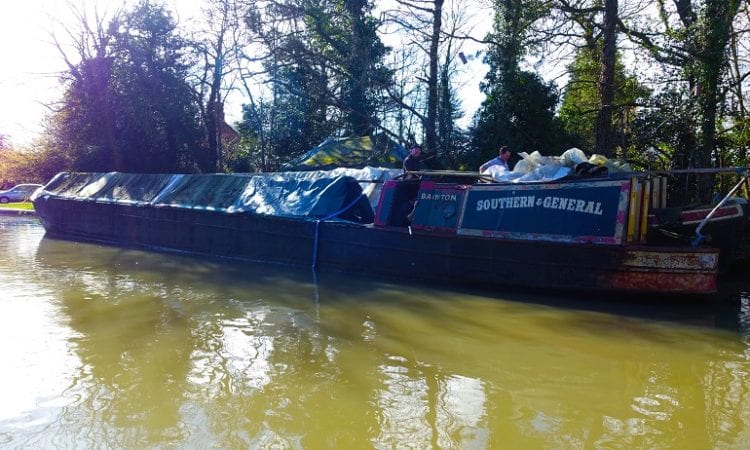 IN AN amazing gesture of support the Shrewsbury and Newport Canals Trust has been gifted a pair of historic working boats by their owner, Roger White – who knew almost nothing of the Trust’s work until recently.

The boats, built in 1936 by Harland and Wolff, on the Thames at Woolwich, are Bainton and Berkhamsted, a pair of Town Class or Large Woolwich boats that were designed to work together from the start.

There were just 24 pairs built and it is little short of amazing that this pair have been brought back together after being scattered across the canal system and are now destined to play a key role in the Canal Trust’s plan to restore the Shrewsbury and Newport Canals.

The vessels are currently on the Grand Union Canal in Northamptonshire but things are moving quickly and there are plans to steer them back, through Birmingham, to take pride of place at the Canal Trust’s popular annual festival at Norbury Junction in early May.

Roger White has gifted the vessels in trust to the charity because he wants to see them brought back to their former glory. He said: “I have owned the boats for 43 years, and for many years I operated them as camping boats for youth groups and the like, all over the canal system.

“I originally bought Bainton, the motor boat, and I only found Berkhamsted by chance. I spotted it near Northampton where some British Waterways staff were painting out the old name and giving it a new name.

“It seems that someone had scrapped the wrong boat, down in London, and Berkhamsted was taken by road to Northampton and quickly given the scrapped boat’s name, to cover up the error. I managed to buy it a bit later.

“Those days have passed and now I want to make sure that the boats are looked after and kept together as an original pair. The Shrewsbury and Newport Canal Trust can do that and give the boats another lease of life as a tool for teaching people about the history of the canals.”

David Ray, a director of Norbury Wharf Ltd, owner of several historic narrowboats and a Trustee of the Canal Trust has checked out the boats and, on his most recent visit managed to get the engine running in Bainton, with help from Roger White and Philip Jones another trustee, and take it out for a short trip down the canal – the first time Roger had been on a journey on the vessel for some years.

Once volunteers have steered the pair up the Grand Union Canal to central Birmingham, a route they used to operate in their working boat days, they will come down the Wolverhampton flight of locks and along the Shropshire Union Canal to Norbury.

David Ray said: “We hope to do some checking on the hull in our dry dock and even a bit of paint applied before the Canal Festival opens and the pair go on display to the public.

In the longer term, the Canal Trust plans to have teams of volunteers working on the restoration of the boats, under expert supervision, and to use them as part of its educational programme which aims to teach youngsters and adults about the history of the Shrewsbury and Newport Canal and the working people and boats of the UK’s unique canal system.

It is possible that the boats may eventually be transported by land to Wappenshall where the Canal Trust is already restoring a key canal basin and warehouses which are part of the old canal infrastructure and become floating classrooms for visitors.