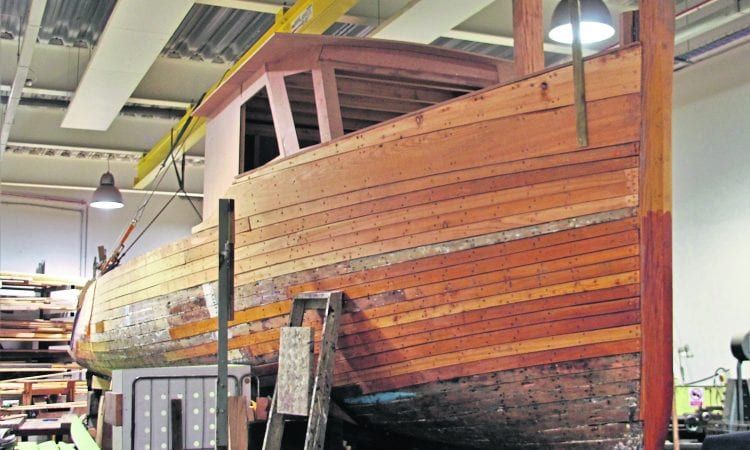 Shipshape: Starcrest being made ready for her new role as a floating classroom on the Clyde.
PHOTO: HUGH DOUGHERTY 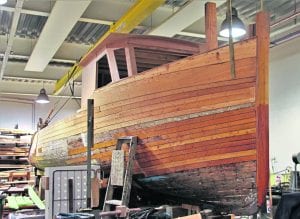 A CARVEL-built pleasure cruiser which is believed to have taken part in the evacuation of Dunkirk in May 1940 is being restored by the Clyde Maritime Trust at its Riverside Museum workshop in Glasgow.
Forty-two footer, flat-bottomed Starcrest was built in 1922 at Margate, sailing from south coast resorts. She is believed to have joined the armada of Little Ships, rescuing British troops from Dunkirk, although the trust has been unable to unearth conclusive proof.
Boat builder, Richard Martin, coordinator of the Anchor and Sail, a Heritage Lottery-funded project that has seen the boat have planking and oak ribs replaced as the first step to sailing her as a classroom on the Clyde, said: “She was bought by a Largs boatman after the war. The belief is that she had been at Dunkirk. With her flat bottom, Starcrest would have been an ideal craft to rescue troops from the beach. After sailing between Millport and Largs for some years, Starcrest operated tours on the Forth & Clyde Canal and was gifted to the trust in 2010 by owner Alan Blakely.”
The cruiser will now be fitted with a replacement engine and caulking will be carried out, once the planks have moved closer together again, as, with drying out in the heated workshop, the gap between them has widened. Options include sinking the boat in the Clyde to allow the planks to become wet again, or laying wet carpets over them.
“We also have our dream ticket,” said Richard. “That’s taking her back down to the south coast in May 2020 to take part in the 80th anniversary celebrations of the Dunkirk evacuation, but, before that, we’re concentrating on getting her into service on the Clyde.”