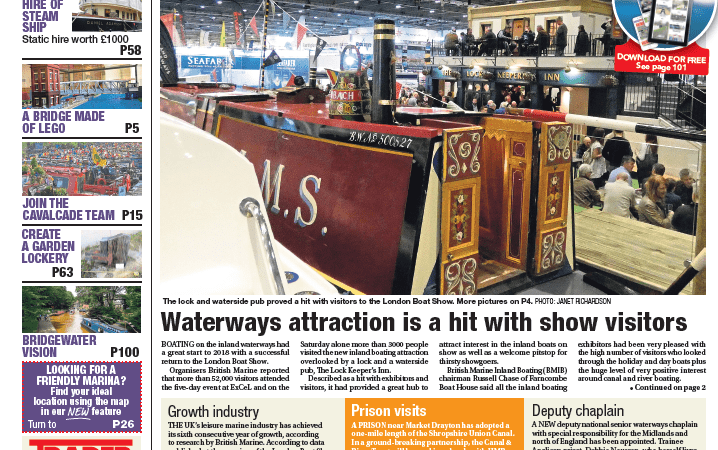 The days are slowly getting longer, the mornings are lighter, and there’s almost a touch of spring in the air… won’t be long now!
To ease you into the feeling of well-being that spring brings us all, the February issue of Towpath Talk contains some super good news stories to gladden the heart. If you didn’t manage to make it to the London Boat Show, you can share in its success thanks to editor Janet Richardson, who spent some time at this season opener to bring you the latest news relating to the inland waterways. 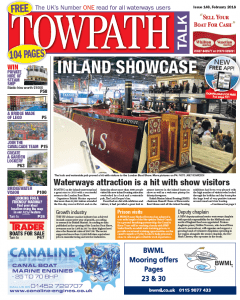 You’ll see from the cover (left) that the show’s organisers decided to create a new inland boating attraction which included narrowboats in a lock, and a waterside pub called The Lock Keeper’s Inn, which proved a massive hit with thirsty showgoers.
In the February issue you’ll find many stories to interest and inspire you, not least Helen Gazeley’s report on Salford’s vision for the Bridgewater Canal. Phillippa Greenwood, in her latest extract from Britain’s Canals, a National Treasure in 100 Must-See Objects, looks at the traditional roses and castles canal art and its roots in waterways history, with stunning images from the book’s co-author Martine O’Callaghan.
Art and music also feature in Towpath Talk‘s February What’s On section, while towpath gardeners in West Yorkshire have been proudly displaying their ‘linear larder’ on BBC One daytime TV series Let’s Get a Good Thing Going. The volunteers of Incredible Edible Todmorden were filmed tending to their community gardens, some of which are based alongside the Rochdale Canal which runs through the town.
Towpath astronomer Brian Jones pinpoints one of the oldest star groups visible in the southern sky during mid-February, the constellation of Gemini. And if you enjoy waxing lyrical about your time on the waterways, you may be interested to know of the appointment of a new Canal Laureate – Oxford-based poet and kayaker Nancy Campbell, who will be putting her thoughts on Britain’s waterways heritage to paper. Or maybe on to a computer or tablet, which brings us nicely to the fact that you can keep up to date with the latest news from your favourite waterways publication on smartphone and tablet, as the latest issue is available via a FREE app now!
If you download the app, you will have access to additional content from our archive; the latest relates to Belvoir Castle Railway. See preview here: https://www.towpathtalk.co.uk/belvoir-castle-railway/ 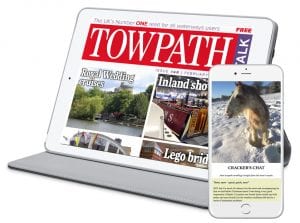 The links for each mobile device are as follows: