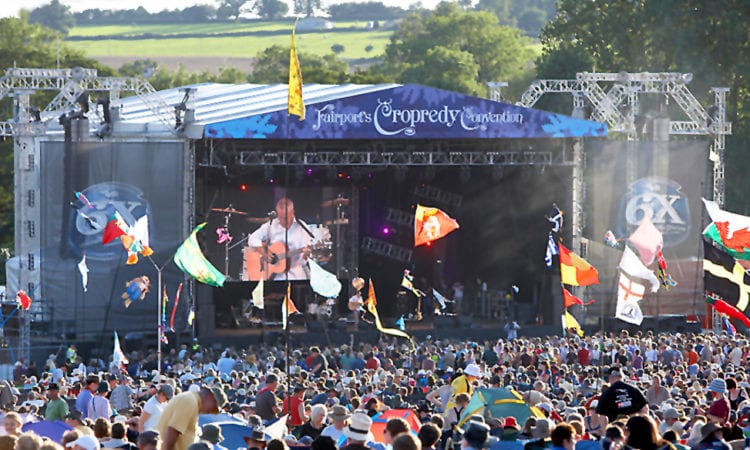 THE line-up for the 2020 Fairport’s Cropredy Convention three-day open-air music festival has been announced.
Now in its 41st year, the festival will take place on Thursday, August 13, Friday 14 and Saturday 15, on its usual farmland site in north Oxfordshire.
“We’re really pleased with this year’s line-up,” said Fairport bassist Dave Pegg. “It consolidates Cropredy’s core appeal, celebrates Fairport’s rich heritage and also introduces a wide and diverse range of music.
“It’ll be a particular pleasure to have Richard Thompson playing with us again during our three-hour headline set on the Saturday evening.”
Cropredy will feature two sets by host band Fairport Convention. On Thursday, August 13 they will open the festival with a short acoustic set. On the Saturday they will close the event with their customary extended headline performance.
Fairport’s Saturday set will include a 50th anniversary celebration of Full House, the band’s acclaimed 1970 LP. The Full House line-up of Simon Nicol, Richard Thompson, Dave Mattacks and Dave Pegg will be joined by Chris Leslie (standing in for the late Dave Swarbrick) to play the whole album.
Cropredy three-day tickets are available via Fairport Convention’s website www.fairportconvention.com

Saturday:
Richard Digance: BAFTA nominee Richard returns to his traditional Saturday slot to get the day off to a flying start.
Holy Moly & The Crackers: Fronted by vocalist Ruth Patterson, this Newcastle sextet mixes British folk with dollops of rock’n’soul, indie, balladeering and a touch of psychedelia.
The Bar-Steward Sons of Val Doonican: This comedy folk and parody band from Barnsley completely stole the show when they played Cropredy in 2018 and are back by popular demand.
Rosalie Cunningham: An English singer/songwriter with a distinct style who has appeared on Later with Jools Holland and supported Jack White’s UK tour.
Matthews Southern Comfort: Fronted by ex-Fairport singer Iain Matthews, Matthews Southern Comfort plays melodic laid-back Americana.
Richard Thompson: Virtuoso guitarist and renowned songwriter Richard will take to the Cropredy stage twice in 2020; in his own solo set and as part of the 50th anniversary of the Full House album.
Fairport Convention: Saturday’s traditional extended headline set.